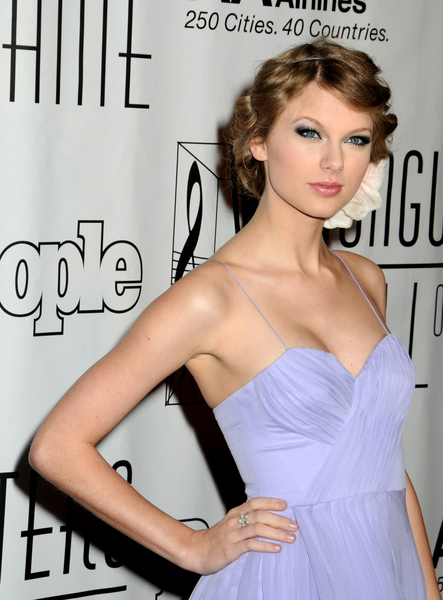 At last night’s stunningly good Songwriters Hall of Fame induction show, Child told me that he’s producing Ricky’s big comeback albums. There will be two–one in Spanish, one in English, with some overlapping tracks. Desmond tells me that one of them, called “Liar,” prompted Martin’s big coming out this spring.

“He was working on the song, and he said, I can’t live this way anymore.’ The next day, he made his announcement.”

The Ricky Martin news was one of many scoops and revelations at the SHOF, the best awards show of the year. Producers Linda Moran, Phil Ramone, and Hal David as usual pulled it off, but even better than ever this year.

There were great moments and odd moments in the Marriott Marquis ballroom. John Mayer, looking uncomfortable, appeared on stage to give Taylor Swift the Starlight Award for new young songwriter. He said, “We’re both like black swans,” and then rambled on about the two of them being unlike everyone else. He also said that even he asked her, “Who writes your songs?” Swift, still 19, gave a very relaxed speech, without using notes. She’s very poised. And she’s going to be around for a while.

Billy Joel pretty much stole the evening. In his tribute to producer Phil Ramone, Billy sat at the piano and dissected some of his biggest hits, recalling how Ramone shaped them. (This is why Ramone and about a dozen other famous producers from Richard Perry to Quincy Jones should in the ghastly Rock and Roll Hall of Fame.)

Billy explained that Ramone chucked a ‘cha-cha’ foundation for “Just the Way You Are” in favor of a more romantic underpinning; fixed songs like “The Stranger” and “Scenes from An Italian Restaurant,” and told Billy that in “She’s Always A Woman” he couldn’t have a line about her “powerful thighs.” He also told a hysterical story about hiding meat all over his house–and not in the fridge–when Paul McCartney came to visit. Joel forgot where he hid it all, and a few days later the smell of rancid meat was everywhere.

Paul Simon, also a Phil Ramone disciple, won Towering Song for “Bridge Over Troubled Water.” Brian Stokes Mitchell performed it soulfully, and Simon thanked Art Garfunkel for making it a hit. He said that Aretha Franklin‘s version was closer to what he’d envisioned when he wrote it, and that Garfunkel was “the white choir boy version” and she was the “black gospel version.”

Originally, Simon said, “Bridge” only had two verses. “I wrote it as a little song,” he said. But producer Roy Halee told him it needed a third verse. So he wrote the “Sail on silver girl” verse that makes “Bridge” a lump in the throat anthem. He said when he finished it, he listened to it and thought, “That’s better than I usually write.”

Simon was genuinely moved by the award, noting that he was now in the company of “Take Me Out to the Ballgame” and other famous songs. “If I can get up to that, I guess I’ve made it,” he said.

There were so many great, great moments, I do wish the SHOF were televised. The show is long, but it’s fresher and more genuine and heartfelt than the Rock Hall. The great songwriter Leonard Cohen, for example got two extraordinary tributes–from Judy Collins, playing piano and singing, “Suzanne” in her crystal clear voice. Famed producer Russ Titelman convinced her to do it, and Collins proved once again that she’s gifted. And kd lang‘s version of “Hallelujah” was like something from another planet. It turns out that she works on her voice for two hours each day, performs, and then retreats.

There’s more: Jackie deShannon, long overdue for awards, sang her “Put a Little Love In Your Heart.” Kim Carnes, raspy and cute as ever, belted out her own deShannon hit, “Bette Davis Eyes” as if 20 years had not passed. Phil Collins and Philip Bailey reunited to sing their 80s hit, “Easy Lover” and each of them got awards. Phil Collins said that getting divorced made him a better writer, so he now has three ex-wives. Bailey got his award with Earth, Wind and Fire, who rocked the house with “September.” Group founder Maurice White, suffering from Parkinson’s, couldn’t make it, however. And Chicago’s famed founding singer, Peter Cetera, sang for producer  David Foster, who in his speech inadvertently thanked “Earth, Wind and Foster.”

And the room was filled with stars, from Ashford and Simpson to CBS-2’s Dana Tyler, Phil Collins‘s long time girlfriend. Composer Philip Glass sat at Leonard Cohen’s table. Evander Holyfield made his annual appearance with Norm Chesky, of Chesky Records. Also on hand: Paul Shaffer, who was glowing as he listened to famed producer Richard Gotterher (“Hang on Sloopy”) trade anecdotes with Sire Records founder Seymour Stein. Frankly, so was I!