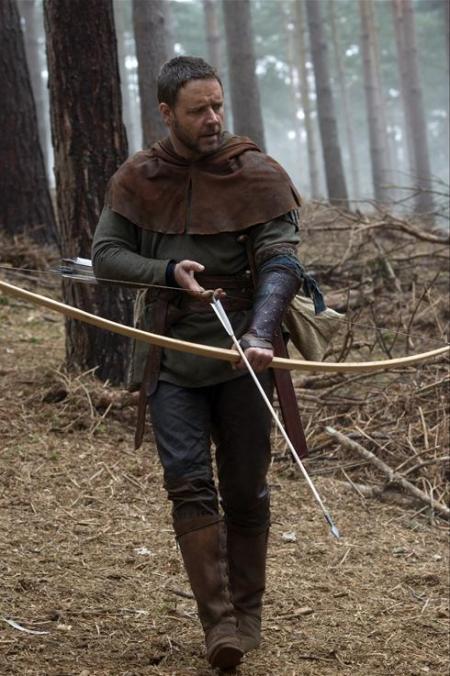 “Robin Hood” is barreling toward us quickly, with a big price tag. Ridley Scott‘s epic, starring Russell Crowe, opens the 2010 Cannes Film Festival next Wednesday. Some insiders are telling me that it will take $700 million to break even.

Earlier this week, “Robin Hood” was screened in the U.S. so some of us going to Cannes wouldn’t have to experience it with jet lag. This isn’t a review, per se, since they won’t come until Sunday. But this much I can tell you: “Robin Hood” is the best opening choice for Cannes in a long time. It’s great filmmaking: exciting, involving, and incredibly human. It’s full of incredible action, too.

What might surprise everyone is that “Robin Hood” may find an audience in an unlikely place: the Tea Party. That’s because Robin’s problem with the rule of King John is taxes! The Sherwood Forest gang doesn’t want to pay them. The whole movie tells the tale of England’s fight against France. But in the end, Robin is declared an outlaw because he’s against taxes. King John keeps levying them. Robin is declared an outlaw. And thus will begin “Robin Hood 2,” the story we all know so well.

But this “Robin Hood” is a prequel of sorts. And it seems to me that it works on all levels–as a romance and an action film. It’s also very modern, as Cate Blanchett‘s Maid Marian is one tough cookie. She’s no damsel in distress, that’s for sure, and gives Robin as good as he gets. Blanchett, with long dark hair, is the perfect foil for Russell Crowe. They are evenly matched, and have lots of chemistry.

“Robin Hood” isn’t all jousting and horseback riding, by the way. Comic (and sexy) relief comes from Oscar Isaac as King John. He’s portrayed as a hedonist and a bit of an idiot, who knows little about defending his people from the croissant-wielding invaders. Isaac is a standout in a large, excellent cast that also, improbably, includes “ER” star Scott Grimes and “Lost” bad guy Kevin Durand. plus the usual good work by William Hurt, Mark Addy, Eileen Atkins. and Max von Sydow. Danny Huston has a brief, but strong turn as King Richard the Lionhearted.

Finally, what’s nice about “Robin Hood” is that Scott has his “Gladiator” team with him. The movie almost feels old-school; it’s real filmmaking. I may be wrong, but it seemed like there was a lot less CGI and more human interaction. “Robin Hood” is a welcome relief from the comic book movies of the recent past. After “Iron Man 2” has its big first weekend, I do think “Robin Hood” will slash and conquer.

But first, “Robin Hood” has to conquer the Croisette. I can’t wait to see this group on the red carpet at the Palais next week. Sacre bleu, the place is going to go crazy!