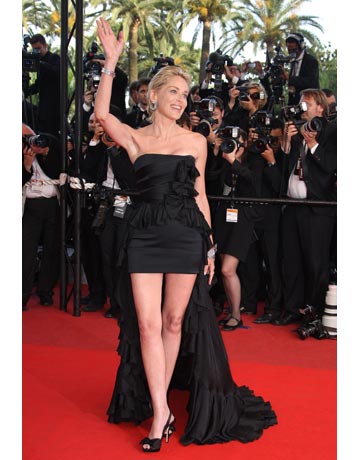 Here’s a shocker: after raising $290 million over the last several years as cheerleader extraordinaire, Sharon Stone will not be at this year’s AmFar Cinema Against AIDS gala in Cannes.

Sharon confirmed for me last night that AmFar simply didn’t invite her this year. “So I took a movie,” she said. “I had to get back to my career anyway.”

Stone will be in Thailand filming “The Burma Conspiracy” when the AmFar dinner occurs on May 20th at the Hotel du Cap in Antibes, France. Prior to this she hasn’t missed a Cinema Against AIDS dinner since it began. Her participation in the live auction is credited for raising $290 million.

“The show,” as she calls it, has been the main attraction for rich Europeans and Arabs who traveled to Cannes just to meet Stone and see her cajole millions out of celebrities and billionaires.

But two years ago, Stone’s “show” was considered over the top and some members of the AmFar board complained about it. Last year, Stone’s participation was limited to speaking just about the late Natasha Richardson. Professional auctioneer Jamie Niven took her place, although Stone’s presence was still the draw.

I did see Sharon last night at the ’21’ Club dinner for an HBO documentary about burlesque, where she shared a table with old pal and co-star Michael Douglas. She told me her four “Law & Order: SVU” episodes are each stand alone; there is no arc that ties them all together. Sharon plays the DA, and she’s loving it. “It’s hard work,” she admitted.

So maybe a year apart will be good for Stone and for AmFar. I predict a reunion in 2011. In the meantime, AmFar leader Kenneth Cole must have some other good surprises up his tailor made sleeve if he wants to extrude the big bucks from the money bags next month.