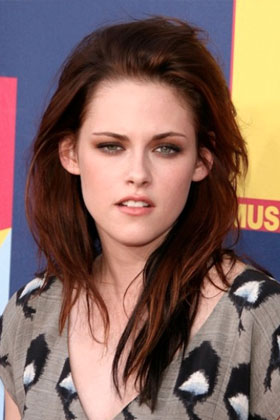 “Twilight” star Kristen Stewart–so good as Joan Jett in “The Runaways” and in “Welcome to the Rileys”– has her next project lined up.

Stewart will co-star with Julianne Moore in “Backwoods.” Sources say the film, directed by Moore’s husband, Bart Freundlich, concerns the end of the world.

“Backwoods,” still to be fully cast, should start sometime this summer. By then, Stewart will be starring in “Twilight:Eclipse.”

Freundlich has three features under his belt including a gem called “The Myth of Fingerprints.” He also recently directed four episodes of “Californication” for Showtime.

Moore, who was denied an Oscar nomination for her wonderful work in “A Single Man,” opens shortly in Atom Egoyan’s “Chloe,” with Liam Neeson and Amanda Seyfried.

The menschy Moore also pays a rare visit to her alma mater, the CBS soap “As the World Turns,” on April 5th, to help celebrate her fictional parents’ (Don Hastings, Kathryn Hays) anniversary and give a nod to the 54 year old soap’s scheduled end this fall.

Moore won a Daytime Emmy playing lookalike cousins on the show. She will only play one for the return. What happened to the other one? “I’m not in touch with her,” the four time Oscar nominee quipped at the “Chloe” premiere last night in New York.

She says she loved being reunited with her soap family, including 92 year old show matriarch Helen Wagner, who plays her grandmother. “She’s still giving us acting tips,” Moore recalls.