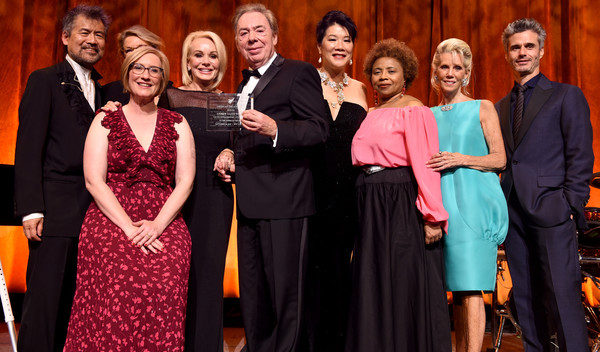 This is most certainly Sir Andrew Lloyd Webber’s year. He is, among many accolades, a newly minted EGOT, joining a rarified few like Rita Moreno who have achieved an Emmy, Grammy, Oscar, and Tony. Not a surprise really when you think that at any given moment, a handful of Andrew Lloyd Webber musicals grace Broadway. His music, sometimes treacly, and sentimental, always bold and operatic is pervasive.

Last night, The American Theater Wing honored him at a swank dinner at Cipriani 42nd Street, with performances of his signature songs by Sierra Boggess, Brandon Victor Dixon, Katrina Lenk, Norm Lewis, and Alex Newell, backed by his School of Rock alums, Evie Dolan, Ethan Khusidman, Raghav Mehrotra, and Brandon Niederauer. The great songs — from Phantom of the Opera’s “Think of Me,” to Sunset Boulevard’s “As If We Never Said Goodbye” —  took center stage, but Webber’s commitment to education became the focus of his grand career.

Imogen Lloyd Webber introduced her father, clearly proud of his accomplishments, and support of education. Proclaiming his inspiration from Rodgers & Hammerstein, Webber also quipped, “the combined ages of the School of Rock musicians is one third of mine.” This was the evening’s only moment of humor. Noting that the arts are often sidelined in schools, Webber got serious in his assertion of the empowering, vital role of music: “We should be talking about how to keep arts in schools.”

As guests including Laura Osnes and many others filed out of the cavernous space, I spoke to Marcus Gladney, a college sophomore from Huntsville, Alabama, a 2017 University Scholarship to Carnegie Mellon. Yes, Ma’am, he said multiple times, grateful that he is now rehearsing to perform in the Broadway company of Choir Boy. Mega producer Jordan Roth said he was busy working on his new web series, “The Birds and the B. S.,” the latest episode featuring Mandy Patinkin, and this year’s Tony winner Katrina Lenk (for “The Band’s Visit), splendid in a red gown, who had just performed “Tell Me on a Sunday,” said she was honored and very nervous, “just glad I got through it!”