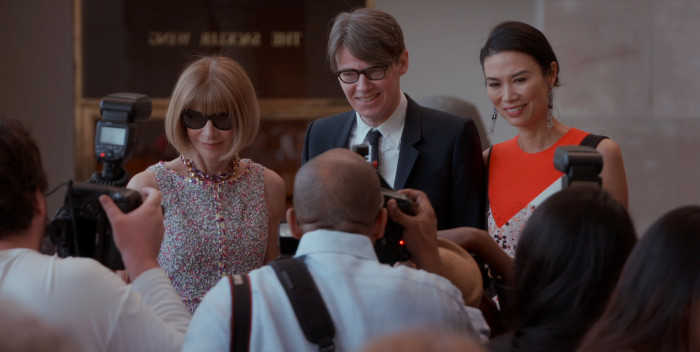 EXCLUSIVE The first Monday in May is here. And with it comes Anna Wintour’s annual bat mitzvah, the Met Ball. Thrown as a party for the Costume Institute, which is now named for the Vogue editor, the Met Ball is as assemblage of high (Oscar winners) and very low culture (Kardashians) all selected by Wintour herself.

A new documentary shows the gritty underside, in which Wintour handpicks the guests and mocks them at the same time. (The film, “First Monday in May,” grossed just under $300,000 since its release on April 15th. Not exactly a must-see.)

But what is the cost of this thing? I just looked back at the last three tax filings for the Metropolitan Museum of Art, and it’s pretty interesting.

The Ball brings in a steady amount of donations to the Museum every year– around $11 million. After the museum contribution is deducted from the tickets, the Ball made $119,500 in 2013 (that’s the last public record– there’s nothing posted so far for last year or the year before).

But wait just a minute: the Met Ball in 2013 had direct expenses of $3.2 million. That’s the actual cost of putting this extravaganza on. (Unknown is what costs are hidden. In the clip below, one of Wintour’s aides talks about “how expensive” it is to host Rihanna, for example.) Gross receipt were $11.9 million.

Suddenly the Ball itself is a red carpet made of red ink.

Indeed, the costs have gone up a lot in the last few years while those Museum donations have remained constant. On the 2012 report, for example, direct expenses were $2.45 million. Gross receipts were $11.7 million.

For 2013, the Museum had seven fundraisers altogether. The total direct expenses were just over $4 million. Almost all of it was attributed to the Met Ball.

Of course, the Met Ball brings a lot of publicity to the Museum, which isn’t bad. And that steady stream of $11 million in contributions is handy since the Museum itself was down by $16 million from 2012 in 2013 in overall public support. Anna’s numbers aren’t going up, but it’s not clear that she cares. I’ve heard of people offering top dollar for tables only to be rejected because Wintour doesn’t approve of them.

So Monday night we’ll be treated to lots of famous women dressed as peacocks, with a huge emphasis on the kind of low life that probably makes Wintour’s Vogue predecessors like Diana Vreeland, Leo Lerman, and Alexander Liberman twirl in their graves. (I knew the latter two and cannot imagine describing some of those people to them.)

With so much attention focused locally here in New York on this event, you’d think this was the only event on Monday night. But I’ll be at Steven Tyler’s charity show at Lincoln Center– much more fun!