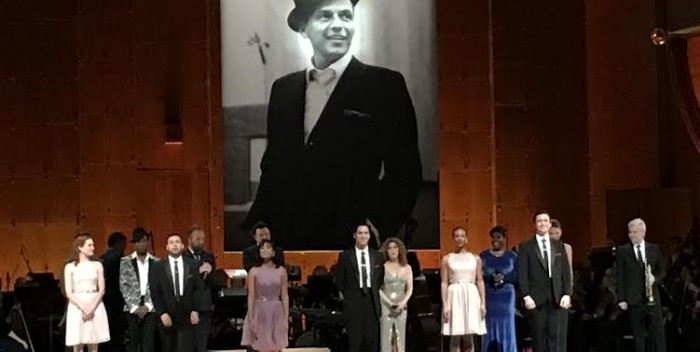 Sting stole the show last at David Geffen Hall, singing two songs in the tribute to Frank Sinatra with Alan Gilbert and the magnificent New York Philharmonic Orchestra. The world’s most famous crooner would be 100 years old this month. To paraphrase Seth MacFarlane, who hosted the show and sang several numbers, that would make him younger than most PBS viewers. The Sinatra tribute was taped for PBS.

Some parts of the show worked really well, some not so much. Sting, the only genuine mega star on stage, also gave his Sinatra numbers some life and personality. His gravel and molasses voice, in fine form, was perfect for “Witchcraft.” Later he and famed trumpeter Chris Botti put their own stamp on “In the Wee Small Hours” with some rhythm for their blues.

Ditto Fantasia, who remains highly underrated even after conquering Broadway and the pop charts and winning “American Idol.” Her entries– “Learning the Blues” and “On the Sunny Side of the Street” — gave Sinatra some unique soul. He would have approved.

Not everyone was so successful. MacFarlane came to this show from taping another Sinatra special Las Vegas on Wednesday night with Tony Bennett and a bunch of current pop stars. He obviously idolizes Sinatra, looks good in a tux, and radiates Rat Pack nostalgia. But his voice is limited, and after a couple of songs he sounds like a demo singer. Less would have been more here, so be advised. Nonetheless, MacFarlane was very funny in his emcee role. We’ll see how much of his slagging makes it onto PBS.

This show includes direction by Lonny Price and choreography by Joshua Bergasse — it’s all simple and elegant. The other Sinatra show, produced by Kenny Ehrlich for the Grammys airs on Sunday on CBS with Tony Bennett. Too bad Tony wasn’t at this one. Or Harry Connick, Jr. (he’s on the CBS show). This show needed them. On the pop front, Natalie Cole seems oddly missing. On the Broadway front I’d have much preferred Norm Lewis or Brian Stokes Mitchell. Maybe they were out of town. Christina Aguilera was kind of a tag on for “New York New York.” Liza Minnelli, of course, would have made for a more dramatic choice.

In the end, go back to the original. There was only one Sinatra. His Capitol recordings are the best, and they are all reissued now from Universal Music. I’ve got the “Sinatra 100” CD with 25 songs in my car, and you should have it in yours. All the crazy stuff you see on the road just melts away when “Summer Wind” is on.

PS The Lincoln Center show was used as a fundraiser to raise more money for David Geffen Hall, formerly Avery Fisher Hall. Geffen gave $100 million to get his name on the building for life, but apparently that wasn’t enough. Dan Crown, who’s an Oscar film in the race with “Beasts of No Nation,” was a producer.