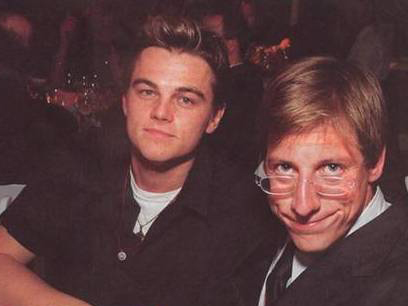 It was none other than Dana Giacchetto who was behind the financing of a video company owned by Marc Collins-Rector, named in the stunning lawsuit filed against “X Men” director Bryan Singer this week.

As soon as I saw the name Marc Collins-Rector, I knew that a big piece of an old jigsaw puzzle had finally been found.

Michael Egan alleges rape and all kinds of sexual horrors by Singer and others at a Hollywood estate in 1999-2000. Collins- Rector owned the estate, formerly owned by rapper and felon Marion “Suge” Knight.

Egan would have been a teen then. His allegations fit in with another story I was reporting at that time, about criminal business manager and Ponzi schemer Dana Giacchetto (Leonardo DiCaprio and Mike Ovitz’s former BFF) and a company called DEN– Digital Entertainment Network, which was owned by Collins- Rector.

It’s a lurid story of Hollywood at its worst. Egan says today that he originally filed a suit in 2000, when all this was going on, but no one listened to him. Now it all may come out. And if Singer is culpable, the saga may involve a lot of well known names.

The Collins-Rector part of the story is what should concern all the parties involved.

Giacchetto (laughingly profiled in this week’s Hollywood Reporter– he just lies and they don’t seem to know it) had started yet another fraudulent financial entity called Cassandra Chase. He’d gotten Microsoft and Dell to invest in DEN.

This is what I wrote first back in 1999 before Giacchetto’s involvement was exposed:

Brock Pierce is not a name you might recognize right away. But the 19 year blonde actor has a long history in Hollywood. He played Emilio Estevez’s younger self in both “Mighty Ducks” movies for Disney and has a host of other credits in teen TV and movies. Now Pierce has become involved in a weird internet scandal. A couple of weeks ago, Pierce was forced to resign from a company he co-founded call Digital Entertainment Network. The company maintains a web site called DEN.com which is backed by investors like Microsoft and Dell. And their purpose is to provide Internet programming that’s like television but isn’t quite—sort of streaming video “shows.”

You might wonder how Pierce, a mere 19 year old, could be the founder of such a company. Or how he managed to swing a four year contract at $250,000 per year plus stock perks and bonuses. I did too.

Walker charged in his suit that Collins-Rector had sexually abused him over the next three years. He even flew Walker out to L.A. when he and Shackley left Bay City for Beverly Hills. Sources tell me that Collins-Rector, Shackley and Pierce have all been living in the former mansion of rap kingpin Marion “Suge” Knight, who is currently in prison.

Last month, Collins-Rector settled the suit of court with Walker and resigned from DEN. Shackley and Pierce also resigned, although they were not named in the suit.

DEN continues to operate. They had planned to make a public offering, or IPO, for $75 million but that has been derailed due to this weird situation. Some of their principles include record company execs Gary Gersh and Jeff Silva, who were brought in to handle the music end of things.

The DEN deal was put together by Chase Cassandra Partners, now known as Chase Capital Entertainment Partners. The actual people in this company include Jeffrey A. Sachs, a former adviser to New York governors Cuomo and Carey, who is also a former dentist. When Sachs put the deal together he was a partner also of Dana Giacchetto, the hotshot money manager who had become best friends with Leonardo DiCaprio and Hollywood agent Michael Ovitz. In the new edition of The New York Observer, which can be found online as well at newsstands, I write about Giacchetto and his unprecedented fall from grace.

In a statement from Collins-Rector, by the way, the DEN founder said he was moving on to start a new business. Guess what it was? Something to do with internet privacy.

While they were at DEN, the founding trio really lived it up. They spent $12 million in the first six months of 1999 on “salaries and other benefits.” They spent another nearly $3 million developing and launching their first internet series. It was  half hour show called “Chad’s World,” named presumably for Shackley and produced by the wunderkind, Pierce. Its subject: the life of a gay teenager.

As for Pierce: I don’t know what his future is in Hollywood, but it’s evident that he hasn’t talked to his dad in quite a while. When I called Jeff Pierce in St. Louis Park, Minnesota he said he had not heard of the scandal and did not know what Brock was up to. “I’ll tell you what, though,” Mr. Pierce said to me, “he’s a smart kid.” I guess so.

And this is what followed after Giacchetto was discovered (by me in the New York Observer and Foxnews.com) to be a fraud who’d gotten his clients to invest in Collins- Rector’s company:

Unbeknownst to Giacchetto, an 18 year old named Jacob Walker filed suit against DEN and its principals in May 1999. He claimed that the company’s founder, Marc Collins-Rector, now 40, had picked him up in a chat room on the Internet five years earlier and sexually molested him for some time. It didn’t help that Collins Rector already had a dicey past: his current partner, Chad Shackley, is only 24 now and advertises the fact that he’s been with Collins-Rector since 1991. Then there’s Brock Pierce, an 18 year old former child actor who seems to be Shackley’s roommate now.

Last week, Collins-Rector settled his suit with Walker by walking away from DEN. He took Shackley and Pierce with him. But before they went, the three had been planning a $75 million IPO. (With Cassandra-Chase’s help, they had also added record company vets Gary Gersh and John Silva to DEN, as well as executive David Neuman.) The IPO has since, obviously, been sidelined.

During their brief, glorious run at DEN, the trio lived it up. In their recent SEC filing they claim to have spent $12 million on salaries during the first six months of 1999. More than two million was spent on developing an Internet “TV” series produced by Pierce called “Chad’s World,” about a troubled gay teen. “Chad’s World” has already come and gone from the Net.