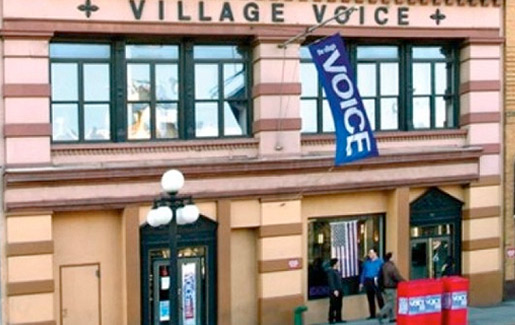 Wayne Barrett has been let go from the Village Voice. He’s been writing his weekly column, Runnin’ Scared, since 1978. He wrote pieces for the weekly newspaper for five years before that. Now he’s been axed “due to budget cuts.”

Tom Robbins, who’s been there almost as long, is leaving, too. There’s some dispute about whether he’s left in protest of Barrett’s dismissal or, as the Voice’s editor is now saying, he wanted to be with his friend. (What? Hello?)

Anyway, I’m surprised the Village Voice is still being published. Who knew? It hasn’t mattered in years. Like so many things from New York’s vital past, the Voice is as dead as CBGB, the Bottom Line, and Lundy’s. You’re more likely to hail a Checker Cab than read the Voice for anything, really.

The current owners, whoever they are, have long since abandoned the Voice’s journalistic history. The old guys are all gone now, including Nat Hentoff, who meant so much to music fans especially.

Barrett, who’s 65, will go on to the Nation Institute and publishing more books. Robbins will likely do something similar.

I took a look at the Voice website today. Barrett’s farewell column has a special link on the front page. But over at the Runnin’ Scared column, which is now a blog, he’s about 10th down on the list. Someone named Jen Doll (what a name!) is busy writing about Newark Mayor Cory Booker’s weight loss, and someone else wrote about dead birds. I guess this is part of the new meaningless blog filling that goes on everywhere 24/7 now, but really how sad…