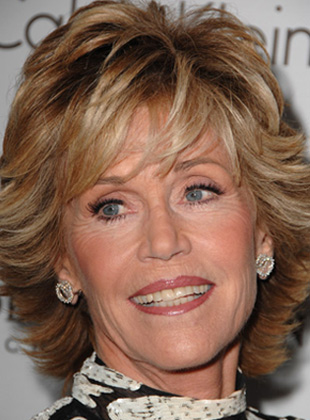 I’ve just been watching Jane Fonda‘s clips from her December 2nd appearance on the Tonight Show with Jay Leno. She’s amazing. Watch them on www.janefonda.com

Yesterday, Jane turned a very young 73. It’s hard to imagine that I met her when she was 44. She’s changed, of course, but only for the better. Yes, she’s made mistakes, and talked about them openly. She’s always been daring and passionate in her politics, and her outlook on life.

She’s just finished writing a book on aging. And this month she’s released a slew of new DVDs for working out–for baby boomers, senior citizens, and next, for young people with new, young instructors.

In the 1970s and early 80s, Fonda — who is Hollywood royalty – was also the greatest American actress. She won two Oscars–for “Klute” and for “Coming Home.” I do think she was cheated on “Julia.” Her other landmarks films of that time include “They Shoot Horses, Don’t They?,” “Electric Horseman,” “The China Syndrome,” “On Golden Pond,” “Comes a Horseman,” “Nine to Five.” With so much interest in Jeff Bridges right now, check out the 1986 Sidney Lumet film, “The Morning After.” The movie didn’t quite work, but it produced Jane’s 7th Oscar nomination.

Now Jane is “shacked up” (as she says) with multi Grammy winning producer Richard Perry, the man who’s responsible for monster hits like Carly Simon’s “You’re So Vain,” Harry Nilsson’s “Without You.” Ringo Starr’s “Photograph,” the Pointer Sisters’ “Jump,” and even Rod Stewart’s latest standards CD. She’s kept Ted Turner as a friend, has raised a successful family, and never stops allowing her intellectual curiosity to grow.