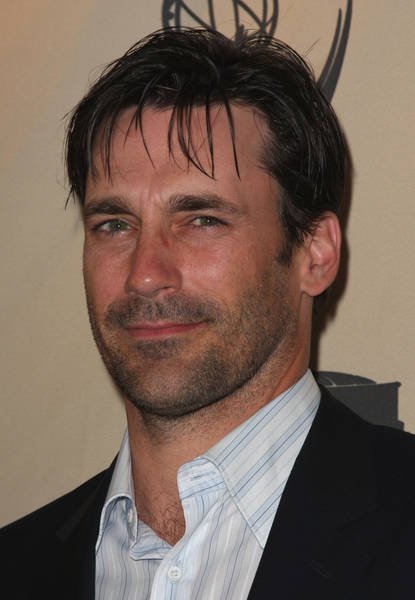 Jon Hamm didn’t win his Emmy Award last night for Best Actor. It doesn’t matter. With only one episode of the show left to shoot this season, Hamm is looking forward not back.

At the Governor’s Ball last night, Jon and his long time girlfriend Jennifer Westfeldt told me they’re getting to shoot a new film which she will film based on her own script.

“Friends with Kids” was already previewed on August 1st in a script reading at a theater festival. Now Jon and Jennifer say they’re ready to roll, and are starting to pull together what’s necessary to make “Friends” before “Mad Men” starts again.

Westfeldt is an accomplished writer and director, of course. Her “Kissing Jessica Stein” is still considered one of the great indie films of all time. Jon Hamm had a walk on in the 2001 production. Now he’ll be the star! The couple also said they’re hopeful Anne Hathaway and Kristen Wiig will be some of the other “Friends with Kids.”

Hamm is well on track to leave “Mad Men” and become a move star when the TV show’s run is up. His management and instincts keep pointing him in the right directions. Not only is he doing a lot of comedy– as in “Saturday Night Live” and on last night’s Emmy show with Betty White–but also on “30 Rock” where he’s been nominated for an Emmy. When “Mad Men” is over, Hamm will not be typecast as Don Draper. His next big digression is a big role in Ben Affleck’s “The Town,” which gets a release in a few weeks.