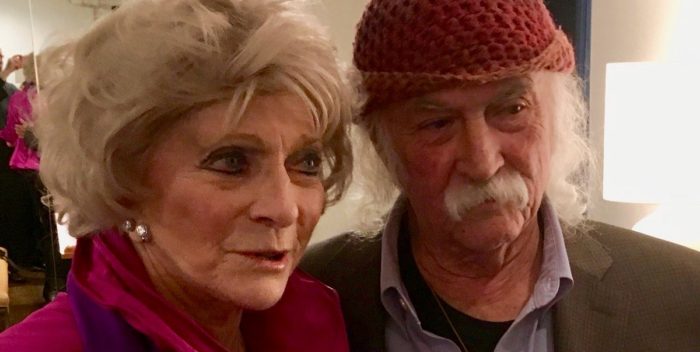 Legendary singer and songwriter Judy Collins called in this morning from her sold out symphony tour about David Crosby. She’s performing with a huge orchestra, doing her famous “Wildflowers” in its entirety plus several of her hits. “It’s been an amazing experience,” she tells me. Collins comes to New York’s Town Hall on February 24th.

Judy told me she’s stunned by the death of David Crosby, whom she’s known for five decades. “It’s funny,” she said, “I’ve been trying to get in touch with him for weeks. I recorded his new song, Radio. Do you know it? I think it might be the best thing he’s ever written. I haven’t released it yet. I was hoping he’d add vocals to it.”

The idea of these two voices on a record together — think of the harmonies — is delicious. But sadly it won’t happen now.

Judy adds, “Nothing prepares you for all these losses.”

The great songbird continues her tour, but will take a break to come to the Grammys on February 5th. Her album of all original songs, “Spellbound,” is up for Best Folk Album. Plus, she never misses Clive Davis’s party, where she usually runs into her old pal, Joni Mitchell. They’ll have a lot to talk about this year.