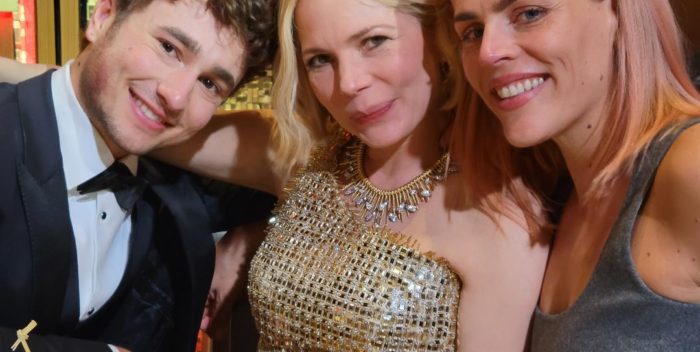 Last night’s Critics Choice Awards show was everything one of these big star studded affairs should be: the most fun ever. Host Chelsea Handler deserves a lot of the credit, she set the tone right from the start without putting anyone down but making gentle fun of the news as it intersected with Hollywood. I hope she’ll return next year.

The big surprise was the Best Picture– “Everything Everywhere All at Once” and its directors, the Daniels, all won. The estimable Cate Blanchett won Best Actress for “Tar,” Brendan Fraser– who most of us thought was out of the race– won Best Actor for “The Whale.”

The supporting actor winners were emotional. Ke Huy Quan continued his run for “Everything Everywhere” and Angela Bassett became the first ever actor in a Marvel movie to win the CCA. They are likely repeating at the Oscars.

The ballroom at the Fairmont Century Plaza Hotel had a very chill vibe to it. Stars mixed with critics, producers, directors, and so on. The place was at maximum capacity but the commercial breaks allowed a lot of socializing, especially among people who hadn’t seen each other in a long time.

I got to meet some actors I really admired but are relatively new to this world. They included Julia Garner, Danielle Deadwyler, Anya Taylor Joy, Jeremy Allen White and Ayo Edebiri, plus I spoke to Jennifer Coolidge, Andrew Garfield, Glenn Powell, Miles Teller, and my old friend Giancarlo Esposito, who won Best Supporting Actor in a Drama for “Better Call Saul.” This was a long awaited award, and much, much deserved. (Coolidge, by the way, having a big year thanks to “White Lotus,” says she doesn’t know what her next job will be. I heard that from a lot of actors this weekend.)

Viola Davis and husband Julius Tennon commanded a table near mine with her “Woman King” director Gina Prince-Bythewood, and “The Fabelmans” with Michelle Williams, Paul Dano, Judd Hirsch, and Gabe Labelle were between our table and the stage. Williams brought her BFF, Busy Phillips, one of my favorite people, who always lightens the tension with a warm sense of humor.

And this was just a quarter of the room. Scattered throughout the ballroom were Julia Roberts, Jeff Bridges, John Goodman, Kaley Cuocco and Tom Pelphrey, director Martin McDonagh, James Cameron, Michelle Yeoh, and the folks from “RRR” (they won Best Foreign Language Feature and Best Song), plus the great writer Tony Kushner, Sarah Polley, Austin Butler of “Elvis” fame, and …you get the idea.

I loved running into Bill Nighy, the popular and famed British star of “Living.” He’s about to get an Oscar nomination. Nighy came to prominence in the US playing the goofy rock star in “Love Actually.” Since then he’s been in dozens of films including “Best Exotic Marigold Hotel” with Judi Dench. So how is Dame Judi, I wondered? (She just turned 88.)

“I just saw last week in London,” Nighy told me. “She made lunch. Lamb chops, green beans, and potatoes.”

I said: “You mean she had someone make it for you?”

Nighy shook his head. “No she did it herself, in her own kitchen and it was marvelous. She’s something else.”

She sure is– and so were the CCAs. Finally, someone got an awards show right!