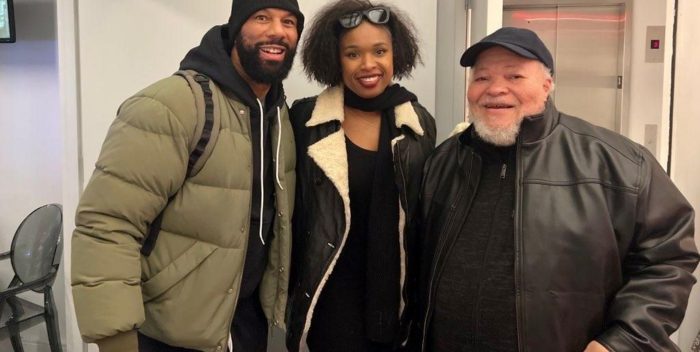 The audience at Broadway’s Helen Hayes Theater turned out en masse for actor/rapper Common making his debut in the hit, Between Riverside and Crazy. They were not disappointed.

That would include Jennifer Hudson, who flew out from Chicago, where she’s been during the holidays, to see her friend get a standing ovation. And Common wasn’t the only actor turning in a great performance last night. “Riverside” is led by the great actor Stephen McKinley Henderson, making his own sort of debut on Broadway — as a leading man.

Henderson originated the role of Pops in “Riverside” back in 2015 at the Atlantic Theater Company to rave reviews. Playwright Stephen Adly Gurgis wrote it for him. Now, seven years later, the production has finally arrived on Broadway with Common playing Junior, Pops’ son, and a magnificent supporting cast that includes a bunch of scene stealers including Michael Rispoli, Rosal Colón, Victor Almanzar, and Elizabeth Canavan. Austin Pendleton, everyone’s favorite director, herds them into perfection.

Henderson is a veteran of August Wilson’s plays, receiving a Tony nomination in 2010 for “Fenches.” You’ve seen him in countless movies. But “Riverside” will be his legacy. Pops, the central character of the play, is a wise cracking, straight talking curmudgeon but much more: as a retired cop and Navy man, he’s developed some fantasies about his accomplishments. But his time as a policeman was ended by a shooting incident resulting in a lawsuit with the city that hasn’t ended over 8 years of haggling. What is the truth of the incident? We’re going to find out.

Gurgis is smart in this play. It concerns racism and ageism, sure. But you know, “Between Riverside and Crazy” is a New York play because at its heart it’s about real estate. Forget all the social stuff: Pops is hanging onto a huge rent stabilized apartment on Riverside Drive. Gurgis strikes a note for the audience not in the humor, or injustice, but because once you have an apartment in Manhattan you’re not leaving it. Period.