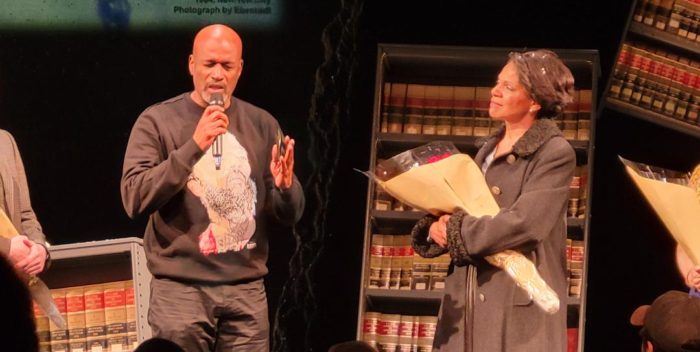 You know that Audra McDonald has six Tony Awards, she’s only 52 so more are coming. And tonight, the 7th was lined up with McDonald appearing in 91 year old Adrienne Kennedy‘s Broadway debut play. “Ohio State Murders.”

The biggest problem with “OSM” is that Kenny Leon directed it, and it’s the second play of this season — starting with “Top Dog/Underdog” — that will net him Tony attention. Leon is having a moment right now after a 30 year year. Who knows what else he has up his sleeve? Plus, his curtain call speeches are becoming legendary as well.

A wild A list crowd showed up at the newly named James Earl Jones Theater (formerly the Cort) which has been transformed into quite a lovely petit palais on West 48th St. I saw next to Tony Goldwyn and his daughter, ran into Rebecca Hall and husband Morgan Spector, LaTanya Richardson chastised me for not seeing “The Piano Lesson” yet, I also spotted Kelli O’Hara, and Molly Ringwald.

At the Champagne reception following McDonald’s breathtaking performance, her husband, WIll Swenson, popped over from his star turn as Neil Diamond in “A Beautiful Noise.” I was also happy to see my old friend, the great writer Joan Juliet Buck with another terrific writer, Allegra Huston (yes, she’s Anjelica’s talented sister) and their friend, the great gold medal Para- Olympian and actress Aimee Mullins (who’s also married to Rupert Friend and has a role in Wes Anderson’s next movie, and has a resume that includes many episodes of “Stranger Things”). Whew!

Why is this Adrienne Kennedy’s Broadway debut? She’s a highly regarded avant garde playwright whose work has been produced everywhere. But a commercial venture? This is it finally. Buck and Huston, and Mullins are all personal friends plus a lot of Kennedy’s family was present. She, they say, stayed home in Williamsburg, Virginia. “She was afraid she’s so excited she’d pass out,” the ladies told me. Well, she has a few months to get ready for the 2023 Tony Awards because “Ohio State Murders” will most certainly be nominated.

Audra McDonald, you also know, is a sensational singer. But the music she sings in “Ohio State Murders” is the song of Suzanne, a fictional representation of Kennedy. Sue is a visiting speaker at Ohio State, where she recalls that in 1952, as a student, one of her two children was murdered. (This is not Kennedy’s story.) The 75 minute presentation is dotted with a supporting cast of vast talents, including Bryce Pinkham, Mister Fitzgerald, Lizan Mitchell, and violinist Abigail Stephenson. But it’s McDonald’s show 98 percent of the time. She’s riveting, devastating, and mesmerizing. Her Suzanne is so commanding that when the play ends you want her to keep talking.