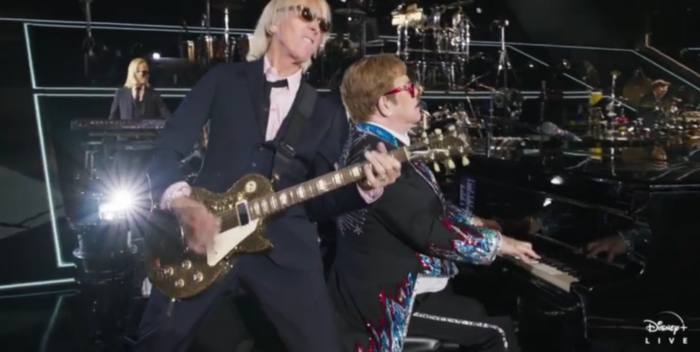 Elton John ended 50 years plus of touring with his final North American show at Dodger Stadium. It was a total blast, a triumph of music and showmanship. The end featured a reunion with Kiki Dee on their 1975 hit “Don’t Go Breaking My Heart” and his 2021 hit with Dua Lipa, “Cold Heart.”

What other artist has had a career like Elton John? When he wrote “I’m Still Standing” his career was in a lull after a decade of superstardom. Every time he was written off, or thought to out of vogue, he came roaring back. This was especially true when he wrote the songs for “The Lion King,” and had an enduring smash in film and on Broadway.

Tonight’s two and a half hour show was concise, and note perfect, from the first song– “Bennie and the Jets” right through to “Goodbye Yellow Brick Road.” Hearing “Your Song,” Elton’s first with lyrics written by Bernie Taupin never ceases to be surprising and wistful. Seeing Bernie on stage at the end of the show, along with Elton’s husband David Furnish and their two young sons — they’ve gone beyond the yellow brick road.

EARLIER: Elton John’s final ever touring show is going on now live from Los Angeles at Dodger Stadium. He’s already played more than a dozen hits, with another dozen to go including a big finale with “Your Song” and “Goodbye Yellow Brick Road.”

So far, the show is a killer, with Elton sounding, rocking, and acting like it’s still 1974 and he’s at the height of his power and popularity. And he’s still got Davey Johnstone and Ray Cooper leading the band. Elton is the main artist whose career coincided exactly with my junior high school and high school years. We all started together. His outpouring of songs and albums from 1969 to 1975 was insane. And it’s remained the soundtrack of all our lives.

Keep refreshing…and check it out on Disney Plus. Extremely well produced. I hope they issue a CD soundtrack.

That’s Brandi Carlile singing “Don’t Let the Sun Go Down on Me.”

Bennie and the Jets, Philadelphia Freedom, I Guess That’s Why They Call It the Blues, Border Song (with a beautiful dedication to Aretha Franklin, who had a hit with it in 1971), Tiny Dancer, Have Mercy on the Criminal (which gave Davey Johnstone a farewell solo), Rocket Man (ending in a tremendous flourish), Take Me to the Pilot, Someone Saved My Life Tonight. Levon (another rave up ending), Candle in the Wind, Funeral for a Friend/Love Lies Bleeding (Elton changed some of his outfit during the first instrumental part), Burn Down the Mission, Sad Songs (Say so Much), Sorry Seems to Be the Hardest Word, Don’t Let the Sun Go Down on Me (brilliant duet with Brandi Carlile), The Bitch is Back, I’m Still Standing, Don’t Go Breaking My Heart (show stopping duet with Kiki Dee), Crocodile Rock, Saturday Night’s Alright for Fighting, Cold Heart (Dua Lipa), Your Song, and Goodbye Yellow Brick Road (he introduced Bernie Taupin, and his famiy).

Missing: Daniel, Lucy in the Sky with Diamonds, Country Comfort, The One, Empty Garden, Little Jeannie, Honky Cat. And that’s just for starters.