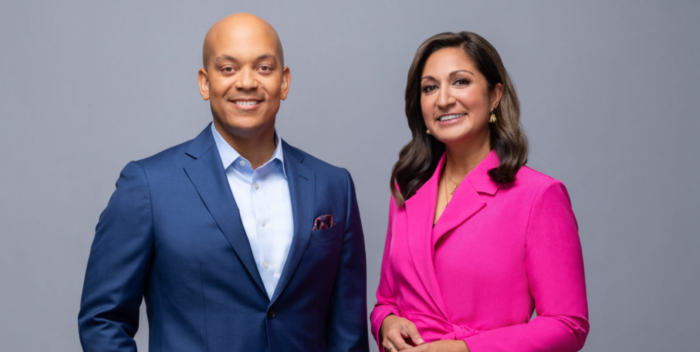 You know that the amazing Judy Woodruff is retiring from PBS at the end of the year.

Her successors on the PBS News Hour have been announced. They are Geoff Bennett and Amna Nawaz. They begin on January 2nd.’ Judy has hosted solo since 2016 when Gwen Ifill, her co-anchor, passed away.

Bennett has reported from the White House under three presidents and has covered five presidential elections. He joined NewsHour in 2022 from NBC News, where he was a White House correspondent and substitute anchor for MSNBC. In his prior experience, he worked for NPR — beginning as an editor for Weekend Edition and later as a reporter covering Congress and the White House. An Edward R. Murrow Award recipient, Bennett began his journalism career at ABC News’ World News Tonight.

Nawaz, who has received Peabody Awards for her reporting at NewsHour on January 6, 2021 and global plastic pollution, has served as NewsHour’s primary substitute anchor since she joined the NewsHour in 2018. She previously was an anchor and correspondent at ABC News, anchoring breaking news coverage and leading the network’s livestream coverage of the 2016 presidential election. Before that, she served as foreign correspondent and Islamabad Bureau Chief at NBC News. She is also the founder and former managing editor of NBC’s Asian America platform, and began her journalism career at ABC News Nightline just weeks before the attacks of September 11, 2001.