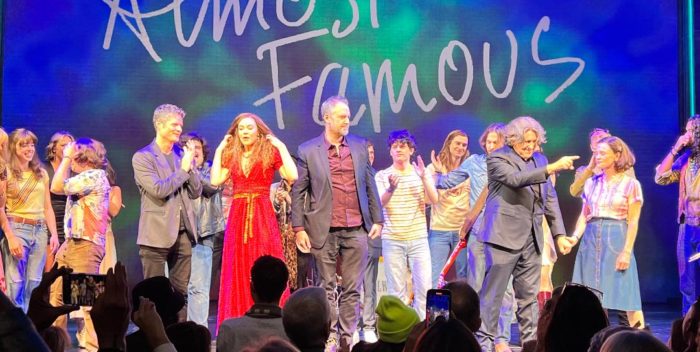 The great 2000 movie, “Almost Famous,” is now a sensationally fun musical on Broadway. It’s wildly entertaining with a totally energetic cast, terrific 70s style songs by Tom Kitt, and an adaptation by Cameron Crowe. It’s not Sondheim, and it’s not complicated, but if you loved the movie you will adore the show that opened last night at the Bernard Jacobs Theater.

And what a crowd for opening. No less than the Queen, Joni Mitchell, arrived wearing black velvet and a beret. Mitchell flew in from Los Angeles to support Crowe. They’ve been friends for years. Also a surprise was the appearance of Steely Dan’s Donald Fagen with wife Libby Titus. Clive Davis sat across the aisle, actor Paul Rudd was behind me, and a ton of other familiar faces including Brenda Vaccaro, Vanessa Williams and director Kenny Leon were seen throughout the orchestra.

The music biz was represented in a big way by Sony Music chief Rob Stringer, famed manager and creator of historic rock music deals Irving Azoff, as well as Davis and Rolling Stone magazine founder Jann Wenner. You can’t imagine all these people jumping over the seats and maneuvering around the aisles to greet each other at intermission. Quite a celebratory scene.

Joni’s presence was particularly poignant as the musical features several references to her famous Christmas song, “River,” as well as the album, “Blue” being held up a few times. The audience was certainly jazzed Joni’s presence. So was the cast. At the start of Act II actress Anika Larsen, a hoot as the main character’s mother, Elaine Miller (played by Frances McDormand in the movie) passed Joni on her way up the stairs to the stage, She broke character for a minute and said, “Joni Mitchell your patchouli is perfect.” The audience roared with approval.

Making popular movies into Broadway shows is no easy task. but the team here has pulled it off with aplomb. Doing this means weaving in existing music from the original film, like Elton John’s “Tiny Dancer” or Cat Stevens’ “The Wind.” The audience is waiting for these cues, as well as famous scenes like Russell Hammond, the rock star, jumping off a roof high on acid, or the whole band, Stillwater, thinking they’re going to die in a plane crash. And yet Crowe, who adapted his own screenplay, manages to pull this jigsaw puzzle together very economically.

None of the actors are well known and all of them are terrific. Twenty year old Casey Likes is an overnight star as William, the 15 year old Crowe stand in who goes off to interview rock stars for Rolling Stone in 1973. Again, Anika Larsen is hilarious delivering her show stopper song, “Rock Stars Have Kidnapped My Son.” The rock band at the center of all this, the fictional Stillwater, is sensational fronted by Chris Wood and Drew Gehling. Solea Pfeiffer is a compelling, seductive and frisky Penny Lane, the groupie — says “muse” — who inspires the band. Kudos also to the Band-Aids, especially Katie Ladner.

The New York Times’s Jesse Green trashed the show in his review. I’ll say he’s wrong, David Rooney of the Hollywood Reporter loved it, and that’s all you need to know. Me? I could see it again in a minute. Go, enjoy. As Penny Lane says, “It’s all happening.”