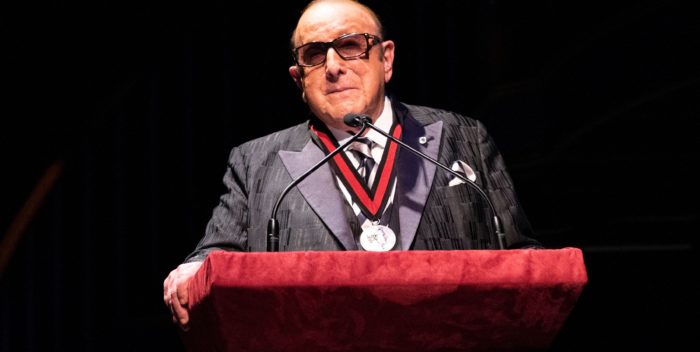 When the National Portrait Galley of the Smithsonian chose music mogul and legend Clive Davis for their Portrait of a Nation collection this year, they needed a great artist to paint the picture. Davis called upon the amazing 90 year old famed painter, David Hockney. Here’s the fabulous result. This is quite stunning. Davis spent several days at Hockney’s studio in the UK last winter. Hockney was already a fan–he’s attended Clive’s pre-Grammy galas as the guest of another mutual friend, Joni Mitchell. Bravo!

On November 12th, all the portraits will be unveiled in Washington. Other honorees, include José Andrés,  Ava DuVernay, Marian Wright Edelman   Dr. Anthony S. Fauci, Serena Williams    and
Venus Williams. The other exceptional artists included are Hugo Crosthwaite, Kenturah Davis, Kadir Nelson, Toyin Ojih Odutola, and Robert Pruitt, and the Premiere of a Newly Acquired Photograph by Ruven Afanador.

None other than the dazzling Alicia Keys will present Clive with his portrait at the Smithsonian Event. Keys’s entire career was launched by Davis at his J Records in 2000, and the pair have remained close ever since. Alicia was just the surprise opening act at that the unveiling of David Geffen Hall at Lincoln Center last week.

Here’s a video from the Smithsonian about the whole project: