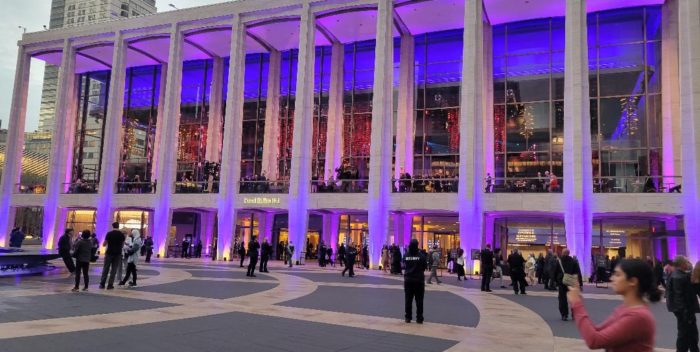 It was a throwback night of celebration in New York tonight as Lincoln Center opened its stunning new David Geffen Hall with an A list party and performance.

First– most importantly — the former Avery Fisher Hall is a total success. The sound in the theater is finally acoustically perfect, a dramatic change since the original Philharmonic Hall opened in 1962. Leonard Bernstein is cheering in heaven at the sleek new design of blonde Scandinavian wood. You feel like you’re on the most expensive Norwegian cruise of all time now that hundreds of seats have been removed. Geffen Hall is now an intimate experience for a massive crowd. The sound imaging is sheer perfection.

We learned that right from the start as conductor Jaap van Zweden led the Philharmonic through two opening pieces that showed the depth and breadth of the new room. For classic enthusiasts the room burst with color and emotion. For people who’ve become accustomed to ear buds, this will literally blow their minds. It’s heaven.

Sting’s long time conductor, Emmy winner and Tony and Grammy nominated Rob Mathes, took over at that point as a parade of New York’s finest artists took the stage. (I was only sorry that Tony Bennett couldn’t be there. This would have been his personal Super Bowl.) Alicia Keys surprised the well-heeled audience of celebs and donors, opening the show with her “Empire State of Mind,” sending shivers through the room. As the evening progressed, Bernadette Peters, Sara Bareilles and Brandon Victor Dixon, Brian Stokes Mitchell, Vanessa Williams, Renee Fleming, and Tony winner Joaquina Kalukango wowed the crowd with cheers and ovations as they covered Broadway, jazz, the American songbook, their superb voices rising over Mathes’s bravura conducting of the symphony.

The pièce de résistance? A symphonized medley of songs from “Hamilton” led by Lin Manuel Miranda and featuring Ta Real Campbell and Nik Walker. Mathes told me later he wrote all new charts for “Hamilton” turning the award winning rap musical into symphonic orchestrations. It’s a credit to Miranda that his already famous music transferred so easily and beautifully into another realm. Someone’s going to get the idea to make “Hamilton” into a symphony after this!

Geffen had asked that no one make a fuss over him, but when the famed music producer/Broadway producer/film producer was introduced the place went wild. He’s literally dragged the NY Phil into the 21st century and couldn’t have done a better job. Stephen Colbert, also making a surprise appearance, joked from the stage that since Geffen had also been a founder of Dreamworks Films, some of the money Geffen donated came from one of their animated films, “Captain Underpants.” I don’t know if Geffen liked that. After all, Dreamworks also gave us “Saving Private Ryan,” “American Beauty,” and “A Brilliant Mind.”

And yes, the new Geffen Hall’s main entrance is a glistening glass garage door. The whole lobby has been updated along with all the levels leading into the theater. If you want a grand old theater, we still have Carnegie Hall and two dozen or more Broadway houses covered in gold paint. But Geffen Hall is a signature for the future. It’s modern but undeniably warm. And it’s opened two years earlier than expected, under budget. As the Philharmonic Chorus sang to open the evening, “Hallelujah!”

PS I hope they taped the evening. Among my favorite moments were Bareilles and Dixon’s duet on “I Can Do Anything Better than You,” and Fleming and Stokes Mitchell taking on “Make Our Garden Grow” from “Candide.”