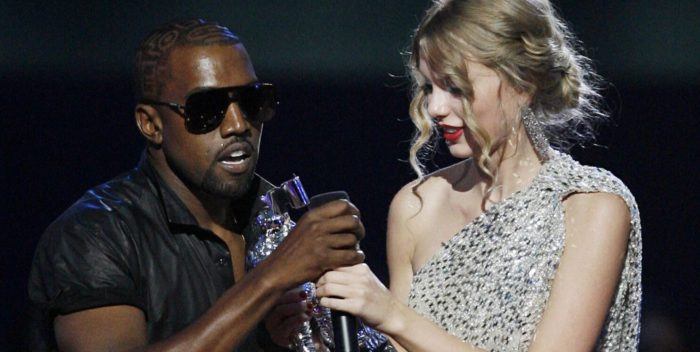 In the next couple of weeks, Ryan Murphy starts shooting his second “Feud” mini series, about Truman Capote falling out with his rich lady friends after he exposed their secrets.

But Murphy’s next “Feud” series could be about Kanye West, a more evil version of Capote who’s burned all his bridges in the last week.

This week, West has lost over a billion dollars after doubling and tripling down on hate speech against Jews. His antisemitic rhetoric has cost him his livelihood for now as all the companies he’s in business with him have severed those relationships.

Ironically, this very same week, his once arch nemesis, Taylor Swift, is on top of the world. By Friday morning she will have sold over 1 million copies of her new album, “Midnights.” It’s the biggest release of 2022.

In 2009, West and Swift became mortal enemies when West jumped up on the stage of the MTV Video Music Awards and interrupted Swift’s acceptance speech for Best Female Video. He announced that Beyonce had had the best video, and ruined Swift’s moment. The feud was launched.

Six years later, in 2015, Swift was persuaded to present West with a lifetime achievement award from MTV. She did it in good form. West responded by saying in his acceptance speech that she only did it for publicity.

The feud continued until West filmed himself making a call to Swift to her permission to rap a line about her in a new song. The line was about her owing him sex after everything they’d been through, She reacted calmly, but the subsequent fallout from the song and a from a video in which he used a wax figure of Swift, only made things worse.

And now 13 years of feuding, of causing other people pain, of creating and losing a family, has led to this ironic week. Swift is on the up, up, and up and West is pretty much destroyed. Even claiming that his bipolar condition made him say and do everything won’t fly this time. Swift, however, will be counting royalty checks and bathing in the light of a super success.

What a weird juxtaposition.

Luckily, a YouTuber has made a video history of their relationship. I’m glad I found it.