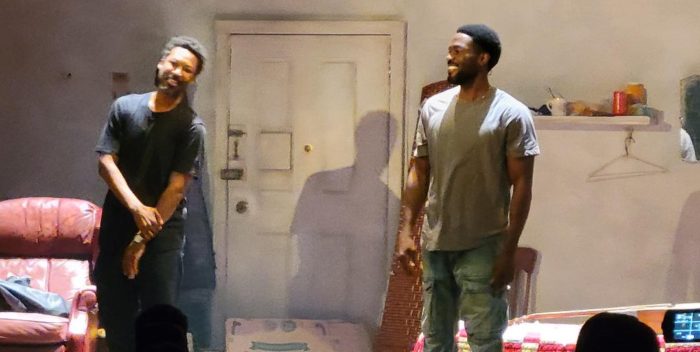 When a show is good or bad coming to Broadway, you can smell it. Certainly the aroma of success was in the air last night at the Golden Theater as celebrities, tastemakers, and investors stuffed themselves into a fairly small room to witness greatness.

Twenty years ago, Suzan Lori Parks‘s “Top Dog Underdog” caused a sensation with Geoffrey Wright and Mos Def in the lead roles. The two-hander play was the talk of the town, and I can still remember how exciting it all was. Last night, for its first revival, “Top Dog” is back and a total triumph with Corey Hawkins and Yahya Abdul-Mateen II taking the roles of the aptly named Lincoln and Booth making them their own. The latter actor is no slouch, but Hawkins is transcendent.

To recap: Lincoln and Booth are adult brothers living together in sort of a happy squalor. Their parents abandoned them when they were teenagers. Lincoln’s job is playing Abe Lincoln in a historical re-enactment of Booth killing him at Ford’s Theater. He wears white face for the job. Booth, the younger brother, seems to rent the one room they live in (no running water, bathroom down the hall). Linc sleeps in a kind of Barcalounger and has an ex-wife named Cookie who is unseen. Booth, more of a ladies man, has an offstage girlfriend name Grace who is the source of romantic frustration.

While Lincoln is busy practicing being shot in Ford’s Theater, his real avocation is being an expert at three card Monte, duping prey on sidewalks. Booth aspires to his brother’s success in this realm, and practices, without much luck, using two milk crates to prop up a piece of cardboard. Booth is no good at it, no matter how much he tries plus he has the Grace problem. When Linc loses his job, their tensions mount. When a gun is introduced, you know no good will come of it.

Kenny Leon directed this production, and it may be his finest of many great moments. He knows it, too. His on stage speech after the show ended was a gift of poetry. It’s kind of amazing when you really get a great night in theater, a memorable one for all the right reasons. This is the third successful Black theater production to open on Broadway in a week, including “Death of a Salesman” and “The Piano Lesson.” You can feel a change has come, and it’s most welcome.

I was seated next to a terrific Black actor named Leon (Leon Robinson). Spike Lee was in the room. So was director Joel Coen, who came by himself to support Hawkins, who’d appeared in Coen’s “Macbeth” movie. Pop singer Joe Jonas and his “Game of Thrones” actress wife Sophie Turner were on hand. Susie Essman, of “Curb Your Enthusiasm” fame, was a guest. (The new “Curb” season starts up again next week.) Al Roker and Deborah Roberts told me during intermission they’d come with a big contingent from the Today show. It was that kind of night.

Hawkins and Abdul-Mateen give the performances of their lives. They will each be nominated for Tony Awards and other prizes, but it’s not enough to say that You must their thrilling work live, in person. I’m looking forward to going back to see them again. Just brilliant.