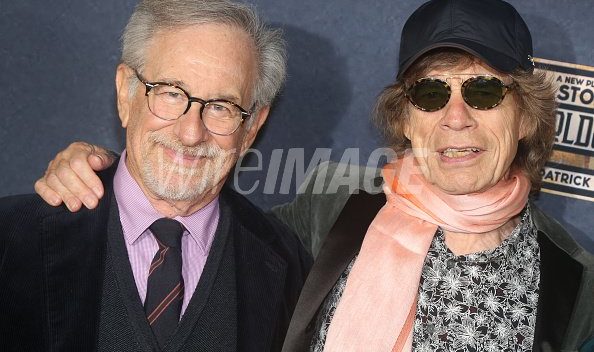 You don;t often see Mick Jagger at a Broadway opening night, but he was there Sunday night for the premiere of Tom Stoppard’s Olivier award winning masterwork, “Leopoldstadt.”

The play is mesmerizing. It will win the Tony Award next June and likely the Pulitzer Prize for Drama. Stoppard is no stranger to awards and great plays but this one is exceptional in every way.

Jagger came as the guest of one of the show’s three main producers, Lorne Michaels. He wasn’t alone in making a buzz in this audience. Steven Spielberg and Kate Capshaw, Tim Robbins, Edie Falco, Steve Martin, Tina Fey, Barry Diller, Tovah Feldshuh (who came over after the “Funny Girl” matinee), Ethan Hawke with Josh Hamilton and Jonathan Marc Sherman all came pouring out of the two hour ten minute play that has no intermission and, last night, started fifteen minutes early without notice.

I thought about Spielberg a lot during the course of the play. He should make a movie out of it, he knows how to do it. Stoppard, author of so many important and classic plays, now tells the story of his Viennese Jewish family beginning in 1899, jumping to 1924, and then to 1938 as they grapple with assimilating into Christian and Catholic culture, resisting it to save their identities, and then hiding — mostly unsuccessfully– from the Nazis.

There are many levels working simultaneously in this story, and Stoppard handles it all masterfully, there’s other way to explain it. He’s got intergenerational characters matched against the rise of fascism. In the final segment, 1955, a character says — with the war over and Hitler defeated — “that can’t happen again.” The audience gasped because it is happening in Europe right now again and we all know it. Donald Trump is pushing it in the US and this is lost on no one.

It’s a huge cast with all outstanding performances. But Brandon Uranowitz, Faye Castelow, David Krumholtz, and Jenny Augen are among the standouts.

“Leopoldstadt” begins, as I said, at the turn of the century in Vienna where Eastern European Jews have arrived, started business, been influential in culture, but are discriminated against in subtle and not so subtle ways. One member of the large, successful family of main characters has a very successful business and has converted to Catholicism so he can assimilate more ease into the hierarchy of society. But Stoppard doesn’t let Hermann get away with that within his own family. The underlying reminder is that when the time comes, the gentiles will identify you as Jewish no matter what you’ve done to alter your identity.

And in the third segment, 1938, we see what’s happened. The family is in hiding, some of have already been taken away by the Nazis. After prospering for 30 or more years, reality has descended as Hitler has risen. The family home has been whittled to nothing. Hermann is forced to give his business to the Nazis without compensation. It’s a quarter century or more since the people of Anatevka were forced from their homes in “Fiddler on the Roof,” but yes, it is happening again. And again.

Every person interested in theater or history, every Jew certainly, must see this play. As soon as possible, for Stoppard, the cast, director Patrick Marber, for ourselves.