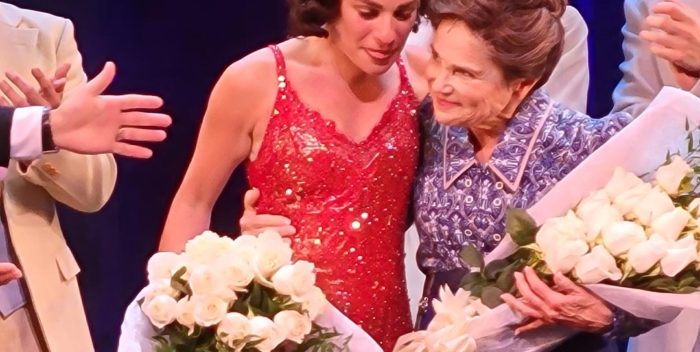 The theater was packed, folks, to the gills. And they were primed for success. This was the first performance for these new actors, and Lea Michele’s debut on Broadway. When she appeared on stage there was a roar from the audience the kind you hear at British soccer matches. They gave Lea Michele a standing ovation before she opened her mouth. “Funny Girl” opens with Fanny sitting at her desk looking out at the audience. Lea Michele actually looked terrified for a moment as these people lost their minds.

Luckily, she came though and then some. You can’t review this new version for a couple of weeks because it has to gel. This was really a first preview. But Michele and Feldshuh have rescued a major musical that went through a lot of sturm und drang since it opened last April. That’s not to denigrate the people they replaced. But now, suddenly, “Funny Girl” has it right.

There were four standing ovations altogether, by my count. There would have been more except everyone was getting tired — three hours including intermission, and it’s very humid in New York. The air conditioning was straining to accommodate so many people jammed together.

Quite a few celebrities showed up. “Star Trek” actor Zachary Quinto was to my left. Michelle’s “Glee” creator, Ryan Murphy, was off to the right with actor Jonathon Groff, also from “Glee.” The show’s book writer, Harvey Fierstein, perched in his seat and seemed to be swooning from the all the ways the show has improved. Imagine what it will be like when critics come to pass official judgements. (There was also an unconfirmed sighting of Gov. Kathy Hochul, but that may have been part of the overheated enthusiasm).

What I liked tonight especially is that Ramin Karimloo, who’s been playing Nicky Arnstein from the start, seemed much looser and more engaged. At one point during an exchange on stage between Nicky and Fanny, Karimloo either flubbed a line or almost broke out laughing. It was nice to see him enjoying himself.

For the curtain call, Lea Michele surprised me. Well, the audience surprised her. I think the cast was in shock. But she really deferred to Felshuh, who is already note perfect, and Karimloo, in her bows and thank you’s from the stage. I think Broadway has finally gotten the star it wanted, expected and hoped for. Outside the theater, as Lea Michele exited the stage door, throngs of her fans chanted her name in unison.

You can’t ask for anything more. Bravo!

PS Note to Mayor Eric Adams: we got out at 10pm and not a single restaurant on West 52nd was still open. New York is supposed to be the city that never sleeps. But now it’s just woke but not awake. The whole theater district rolls up their carpets early, much like the rest of the city. It’s time to signal the area is safe, the pandemic is over, and let’s get back to business.