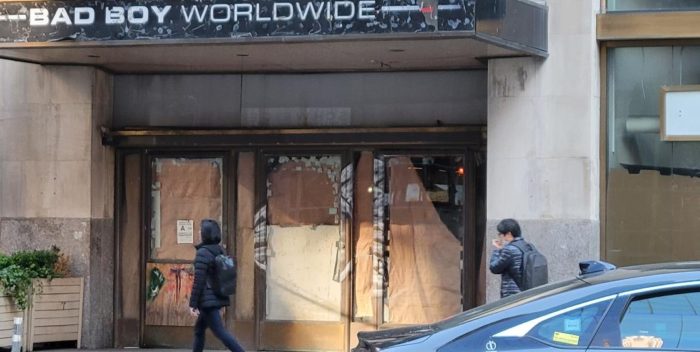 Sean P Diddy Combs has struck out big time with his comeback single.

Fans have already moved on from “Gotta Move On,” released on Friday and featuring Bryson Tiller. After a short run to the top 30, the single is now at number 99 on iTunes. It will be off the top 100 by later today. gone,completely gone from the Top 200 after 4 days. It’s also MIA from Apple’s Top 100 streaming singles.

Diddy recently announced a distribution deal with Universal Music’s Motown label to put out his first new album since 2006’s “Press Play” which wasn’t much of a hit. Diddy’s real period of recording success was between 1999-2003, when he launched Bad Boy Records by covering The Police’s “Every Breath You Take” as “I’ll Be Missing You.” The whole thing was hooked to memorializing Biggie Smalls. Biggie’s widow, Faith Evans, sang lead and Sting, who wrote the song, got all the royalties.

Diddy’s other acts on Bad Boy have fallen out with him over time, including Mase, who’s been begging Combs to give him back his masters and publishing. Combs is worth a fortune — mostly from Ciroc Vodka — and Mase is struggling. But Combs– who complains publicly about white record company execs ripping off Black artists– has refused.

Now comes “Gotta Move On,” which is supposed to be about Combs breaking up with long time girlfriend, Cassie. But yesterday, Cassie’s husband, and father of their three children, posted a catty text on social media suggesting Combs– the father of six — is gay.

But the real problem with “Gotta Move On” is that it’s not very good. The record sounds like it’s from the early aughts and isn’t very exciting. Tiller is a marginal act, so the combination has added up to very little.

Can Diddy’s new label do anything? I don’t know, but the remnants of Bad Boy can still be seeon Broadway in the West 50s where the old sign is fading in front a closed building.