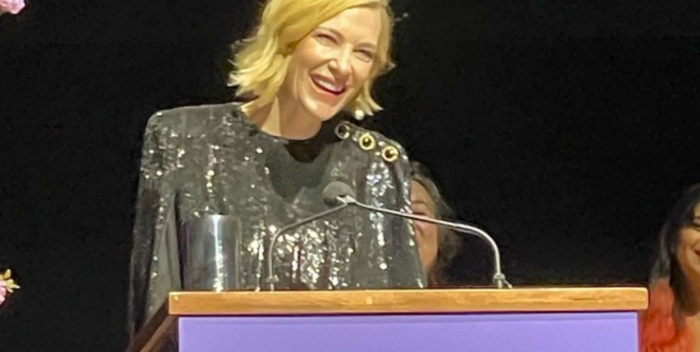 Cate Blanchett must be wondering what the Chaplin Awards were like in the old days of the Film Society of Lincoln Center.

In the heyday, long gone, a dozen or so pals of the honoree would turn up on stage and in the audience to give toasts and salutes.

But last night at Alice Tully Hall, double Oscar winner Blanchett was gamely on her own. What happened? The organizers booked only two big names to honor Cate: actor Bradley Cooper and director Todd Haynes. But neither of them showed. Each reportedly tested positive for COVID.

Blanchett rose to the occasion, sparkling and elegant as usual. When it was announced that neither Cooper nor Haynes had made it, Cate yelled out from the audience, “But I’m here!” She did all the photo ops and gave a beautiful acceptance speech. She’s the second youngest ever recipient of the Chaplin, but she certainly deserves it for a stunning body of work.

And yet, you wonder where everyone was last night. The Film Society couldn’t get any other celebrities to come and present? Where was Martin Scorsese, who directed Blanchett to a Best Supporting Actress Oscar in “The Aviator”? Obviously her “Blue Jasmine” co-star Alec Baldwin wasn’t in a position to attend, and Woody Allen wasn’t going to put himself through that.

So, not a great turn out. But congrats anyway, Cate. Blanchett is currently filming a mini series for Alfonso Cuaron that she described as “seven feature films.” So that will be seven Emmy Awards next year!