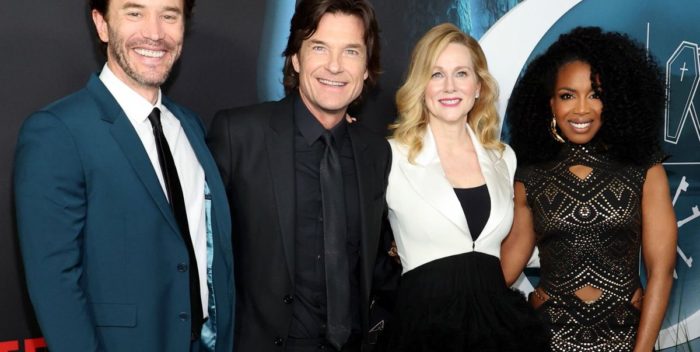 I may be one of the very few at the extremely overcrowded “Ozark” premiere last night in New York who’s seen the end of the series. When I mentioned this to a couple of people who were even in the show, they threw their hands over their screamed, “Don’t spoil it!” Don’t worry, I won’t.

Netflix gave the much acclaimed and beloved series a splashy farewell party at the Plaza Hotel’s Oak Room across the street from the Paris Theater (which they’re currently renting). They showed the first two episodes of season 5, or season 4.2, to the cast including Jason Bateman, Laura Linney, and several other cast members who I really enjoyed meeting. But not to Julia Garner, their Emmy winning “Ruth,” who is now filming a new project in London after scoring so well in “Inventing Anna.”

I did to get to the show’s creator, Chris Mundy, who at least had a sense of humor when I grilled him about several things from this season and last. He was happy to hear that I was surprised by a couple of sharp twists in the final episode. I told him I yelled at the TV and considered throwing something at one point. I think this made him happy.

Biggest surprise of the evening: actress Jessica Francis Dukes, who played pregnant FBI agent Maya in seasons 3 and 4. In real life, Dukes has never been pregnant, is about 20 pounds lighter than Maya, and a hundred times more glamorous. She’s also quite a bit younger. The transformation is kind of amazing. Dukes is a charmer. She just appeared on Broadway in “Trouble in Mind.” She has an Obie Award! On TV, she’s been on Marvel’s Jessica Jones, New Amsterdam on NBC, NCIS: New Orleans, The Good Wife on CBS.

The party was so loud and sardined with utterly fatuous party extras that Dukes never got to tell me her most important credit: playing Vera in “By The Way, Meet Vera Stark” at The Signature Theatre Off-Broadway a few years ago. This woman is a star! (PS the party was so loud that several guests of honor, like actor Tom Pelphrey, got out fast.)

Meantime, Laura Linney will miss most of Emmy campaigning season. She’s off to Ireland to film a movie with Maggie Smith, no less. She will definitely be nominated for Best Actress and could/should win. Her performance as Wendy Byrde is nothing less than spectacular.

PS What happened to the days of really interesting, powerful, and cool guests at parties? Bring back Peggy Siegal already!