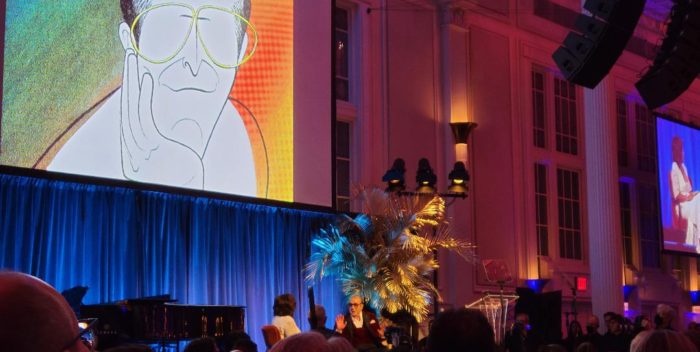 Clive Davis‘s 90th birthday blow out part 2: A throwback pre-pandemic like gala for 600 friends at NYC’s newest, sexiest ballroom at Casa Cipriani. It’s a former Maritime Building at the tip of southern Manhattan, left to rot for eons and now an art deco palace with extraordinary appointments. It’s a hotel, it’s a club, it’s a ballroom. It’s like a dream.

So 600 people arrive either formal clothes or close to it. The list of celebrities is endless, and the performers are staggering. At my table — seated dinner — for example: nothing less than Robert Flack, Rev. Jesse Jackson, and former Mayor DeBlasio with wife Chirlane. (The mayor and I laughed because the last time we saw each other we were trapped on the stage in Central Park during the rained out Welcome Back, New York concert.)

It was a dizzying night.

Alicia Keys made a beautiful speech and then David Foster, who took over the music portion of the show, persuaded her to lead the crowd in Happy Birthday. Then Alicia and Swizz Beatz were having so much fun they stayed til the end of the night. Foster accompanied Dionne Warwick on piano when she sang “That’s What Friends Are For.” Kenny G played his clarinet with them. Barry Manilow sang “Mandy” and played piano. Art Garfunkel sang a section of “Bridge Over Troubled Water” that was heartbreakingly beautiful. He sat at a table with former Rolling Stone owner Jann Wenner, and Bruce Springsteen manager Jon Landau. Nancy Davis and husband Ken Rickel came in from LA, so did Suzanne Somers.

Springsteen was supposed to come, but sent a video at the last minute. He said, “We are quarantining here in New Jersey.” We surmised he tested positive for COVID. His video was a birthday greeting, a salute to Clive, and Bruce playing guitar and singing “Blinded by the Light.” He seemed without symptoms, thank goodness.

The evening began with Gayle King asking Clive questions on stage: it was very clever and funny. All the things you ever wanted to ask Clive Davis about 60 years of the music business, his personal life, family. It was so refreshingly disarming. He identified himself as a “worrier.” What’s he most worried about? “What Russia is doing to Ukraine.”

Clive’s sons spoke, and his grandsons. His whole, huge family was in attendance. Nancy Pelosi sent a video. Mark Ronson made a fascinating two hour film mixing all of the music from the history of Columbia, Arista, and J Records. As each act came up on screen, people in the ballroom cheered seeing friends or former associates. Jesse Jackson, fighting Parkinson’s, made the trip from Chicago. He fist bumped everyone at the table. We reminisced about meeting the Pope with Aretha Franklin in 2016. He told me, “I miss Aretha.”

Everyone had to show proof of vaccination. Some wore masks. Most did not. Most everyone discussed getting the fourth shot as people hugged old friends they hadn’t seen in two years or more. it was a love fest, not just for Clive, but for surviving and thriving.

Come back later for some photos and video.