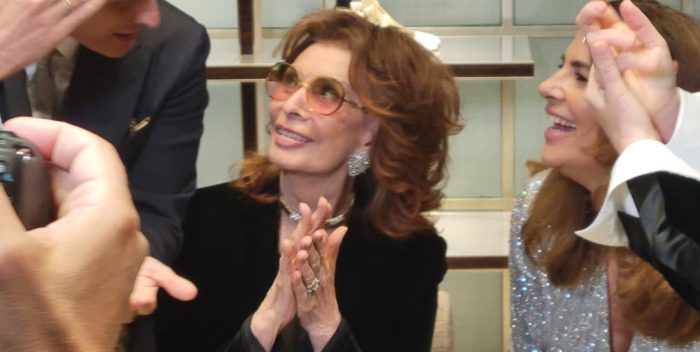 So many parties, so few stars, and almost no nominees.

The event was billed as a top liner for Oscar nominee Nicole Kidman, who was radiant. And Kidman was especially pleased to see her “Rabbit Hole” star from a few years ago, Miles Teller, who’s about to play “Godfather” producer Al Ruddy in the Paramount Plus mini series, “The Offer.” Teller his beautiful wife, Keleigh. 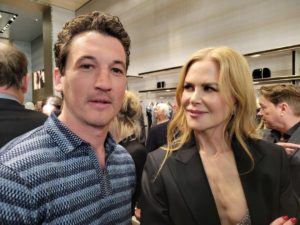 There were a lot of other familiar faces in the party. But when Roberta Armani, the designer’s daughter, went to the front entrance she returned with actual royalty: Sophia Loren, with her son director Eduardo Ponti. By then Nicole had proceeded through the room, so that she and Loren were holding down opposite corners.  The room had what they call “buzz.” Like crazy.

Media mogul Byron Allen was there with his elegant mother, decked out in Armani head to toe. Actor Colman Domingo from “The Walking Dead’ and about 15 other projects was on hand, as was “Dopesick” creator Danny Strong. Young Michael Gandolfini, son of the late James and star of “The Many Saints of Newark” told me about all the projects he was involved with. LA socialites like Kathy Hilton, Nikki Haskell, and Marjorie Gubelman were in attendance.

And then were was “Dune” director Denis Villeneuve, who told me “Dune Part 2″ is already in production. I asked about Zendaya, who appeared just toward the end of ‘”Part 1.” Denis assured me, “There will be plenty of Zendaya in Part 2.” He also said he was knocked out watching the young actress in “Euphoria.”

Sebastian Stan — our Bucky from the Marvel universe– waited to talk to Nicole. I told her, “Don’t get too close, he’ll take a bite out of you.” I was referring to his Hulu movie, “Fresh.” But Sebastian exhibited no dining interest in Kidman.

Sophia Loren– as of yesterday afternoon, she said she was not attending the Oscars. She received compliments for her 2019 movie, “The Life Ahead,” and allowed a few people to have pictures taken with her. She is 87 and more beautiful than ever. The fact that she chose Armani over parties given by Chanel and other designers speaks volumes, I think. Loren is the ultimo classico!

PS Just so you know Armani is not just for the seniors, coming in as we were leaving was “Borat” star Maria Bakalova, who’s taken to the red carpet very nicely. Designer Zac Posen was there, too, with lots of young stars.