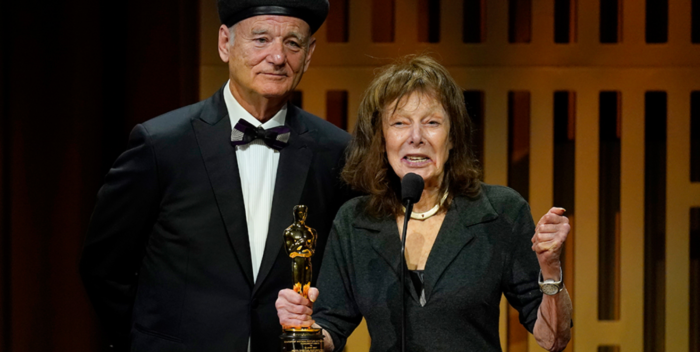 I was shocked when I heard Elaine May turned up at the Governor’s Awards, the Oscars version of Lifetime Achievement on Friday night.

She looked great on the New York Times’s Kyle Buchanan’s Twitter feed. She even cracked that she’d been promised “Zelensky” — the president of Ukraine — was going to give her the award. Instead she had to settle for Bill Murray.

My shock was because all day Friday I heard from people in the great director and writer’s camp that she was absolutely not going to the ceremony.

Even though Elaine had gone to Los Angeles, she had nixed the plan to actually attend the Governor’s Awards.

Within seconds of her arrival at the Hollywood and Highland center, I received an email: “Bill Murray persuaded her to go. I don’t know how it happened.” By all accounts, May was the last to arrive and the first to leave. She didn’t walk the red carpet, and didn’t remain long enough to be in a group picture with the other honorees.

Elaine was feted along with Samuel L. Jackson, Danny Glover, and Liv Ullman. The Governor’s Awards are usually held in November, but this year they were delayed because of the Omicron COVID spike.

So congrats to Elaine, and everyone is glad she changed her mind. The 90 year old was comedy partners with Mike Nichols  in the late 50s and early 60s, became a doctor on screenplays, then directed such hits as “The Heartbreak Kid” and “A New Leaf.” Her list of credits is endless. She also won a Tony Award just three years ago for “The Waverly Gallery.”

“They told me Zelenskyy would introduce me…” jokes Elaine May, accepting her honorary Oscar. pic.twitter.com/LFnkDd0efn