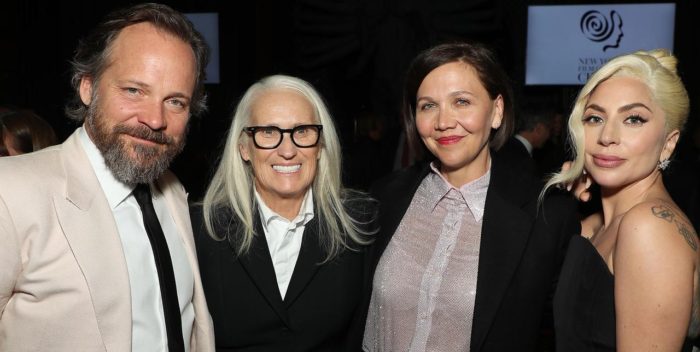 Before Lady Gaga spoke last night at the New York Film Critics Awards, I got a couple of minutes to talk to her. Dressed in a very elegant black frock, her blonde hair upswept, Stefani Germanotta told me how thrilled she was to get a prestigious award from the NYFCC– for “House of Gucci.”

She was without a doubt the biggest star of the night at Tao Restaurant. She laughed recalling the original version of this hip place, uptown on East 58th St. “We were always trying to sneak into Tao. Now here I am!”

I asked her about the Grammys. She and Tony Bennett are up for several for their album, “Love for Sale.” “I’m really thrilled to be nominated with Tony for best pop duo,” she said, and did a little shimmy of excitement. She told me it’s not clear anymore if Bennett– who has Alzheimer’s — recognizes her. But, she said, at 95 and a half, “thank God we still have him!”

Not only did Gaga — who brought her mom as her date–  stay through the whole three hour ceremony, she remained afterward and took pictures with everyone, from Maggie Gyllenhaal and Peter Sarsgaard to Jane Campion, and “Drive My Car” director Ryusuke Hamaguchi. In his speech accepting Best Picture from Jim Jarmusch, Hamaguchi said — through his interpreter — how unreal the whole night seemed with Gaga sitting in front of him and Martin Scorsese in the room. (Scorsese came to give Campion Best Director for “The Power of the Dog.”)

If all this was surreal for Gaga and Hamaguchi, wait: Campion, receiving Best Director, was fighting back tears not altogether well after Scorsese gave her her award. She talked about how Susan Sontag took her out 30 years when her first movie, came out in 1989. She said she’d had a rough time with the critics back then. Not anymore! Campion has racked up all the directors’ awards this season and is headed to a certain Academy Award on March 27th.

Aside from Gaga, no other actor winners were present. Benedict Cumberbatch, Kodi Smit-McPhee (who sent a very nice video), and Kathryn Hunter were all no-shows because the NYFCC dinner had been moved from January because of COVID. The other biggest winners in attendance were Joachim Trier, director of “The Worst Person in the World” (Best Foreign Language Film) and Paul Thomas Anderson, whose screenplay for “Licorice Pizza” was awarded. Both young stars from that movie, Alana Haim and Cooper Hoffman, were present but said nothing. (The really rude MGM publicists were there, too, not making any friends.)

One highlight of the night was an introduction speech from “Worst Person” star Renate Reinsve, who is Norwegian but showed she has no problem with English. She is not only beautiful but hilarious in her delivery. American directors should find something for her immediately.

Star veteran comedian and actor Robert Klein appeared to give a special award to film critic Marshall Fine, who made a documentary about Klein a few years ago. Robert Klein has just turned 80! He looks a lot younger, and “killed.” He was very, very funny. Later, Fine received a shout out from Hamaguchi, a fan of Fine’s book about director John Cassavetes.

Update coming– keep refreshing — with pictures and video to come…

PS A great night, thanks to Janice Roland and Falco Ink for putting it together. For most it was the first large gathering of note in two years, and it went off perfectly…

PPS A couple of people who attended the National Board of fans dinner two nights ago, said that conversely, the room was hot at Cipriani 42nd St. no one could breathe…sounds like fun! I guess they really packed in those $600 ticket buyers…