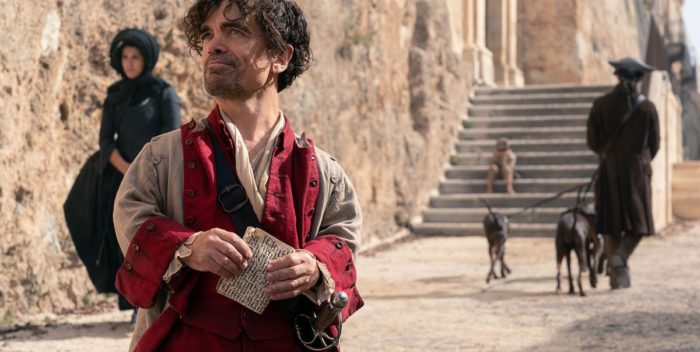 Which headline is best here? “Cyrano Loses By More Than A Nose”? Or “Cyrano Comes Up Short”?

Either way, “Cyrano” starring Peter Dinklage as Monsieur DeBergerac and Haley Bennett as Roxanne, has finally been sneaked into theaters by MGM/United Artists and gone to its death. The Friday take was just 470,000. Audience was composed mostly of the morbidly curious.

This “Cyrano” is a bad movie featuring a very good lead performance by Dinklage. The ads do not indicate it’s a musical because it’s a terrible one with songs that should never have been sung or written. They were composed by the Dessner Brothers from the not entirely successful rock group The National. Dinklage’s wife, Erica Schmidt, then staged this thing way off Broadway a couple of years ago, with Dinklage and Bennett. Then Bennett’s boyfriend, Joe Wright, was brought in to direct it for the movies.

“Cyrano” was as doomed as the romance it involves: shown at festivals last fall, it should have been released before the end of the year. When that didn’t happen, some thought Valentine’s Day would make a little sense. But MGM/UAR was looking for its third strike, or fourth, I can’t remember. Already “Flag Day,” “Respect,” and “Licorice Pizza” have been swallowed whole by the yawning gap of the theatrical crisis. Why not this one, too?

In DeBergerac’s famous play, Cyrano was the object of ridicule because of his long nose. So why not change that to Dinklage’s version being mocked for his lack of height? I’ll tell you why: because of Dinklage (and others) working hard for respect with vertical challenges, were are now sensitive to that issue. The nose thing always worked as a device and would have again. But now in this film we’re just uncomfortable about everything. (Dinklage is such a star, we never think of his height, only his stature.)

MGM/UA seems to have enough money to buy movies with star names, but not movies that are fully cooked. There’s something off about all of them: “Respect” showed none for Aretha Franklin. “Licorice Pizza,” no one understood the title. Now this one was unable to scale any heights. And “Flag Day” was never rung up the pole.

And still Amazon waits to buy the company or merge with them, but the FTC stands in their way. It may be for the best.