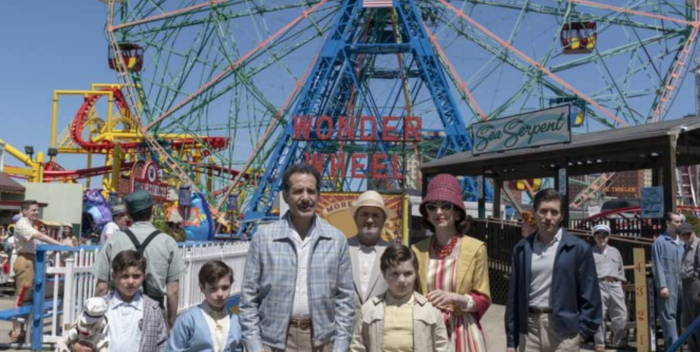 We’ve seen two episodes of Season 4, and they are spectacularly inventive, witty, and charming. They drop on Friday on Amazon Prime.

Everyone is back even Jane Lynch, briefly, although it looks like she’ll be seen in future episodes since she’s desperate for Susie (Alex Borstein) to represent her again. Her show stopping scene is preceded by one with David Paymer. So you know we’re on the right track.

When we last saw Midge and Susie they’d been fired by Shy Baldwin. Midge (the sensational as ever Rachel Brosnahan) had “outed” him at the Apollo Theater, so his manager (Sterling K. Brown) axed them from the tour. Midge had used her contract as collateral for a loan with her father in law (Kevin Pollack) so she could buy back her apartment on the Upper West Side. To complicate matters, Susie — after gambling away all of Midge’s money– set fire with her sister to their dead mother’s house to collect the insurance money. Now investigators are looking to this, denying her the payment.

I’ve told you all this here, in a conventional way. Midge returns to Queens to give her parents all this bad news, but they are headed to Coney Island. She winds up telling them on the Wonder Wheel in a sequence that deserves writing and directing Emmy Awards for Daniel Palladino. It’s just brilliant and smart, and you’re grateful such a thing of beauty still exists.

This is Season 4, but it’s only 1960: “Mrs. Maisel” began in 1958. The clothes remain a character unto themselves, as does old world New York. Midge’s dad, Abe, has gone to work for then-new Village Voice as a theater critic. That’s Tony Shalhoub, curmudgeonly effervescent as always. Joel (Michael Zegen) is trying to hang on to his Chinatown nightclub. And Midge is looking for a way to restart her career after the Shy debacle. By the end of episode 2 she finds a new venue, but we are asked by Amazon to keep it a secret. At least until Saturday.

Amazon will drop two episodes a week instead of the whole bundle at once. I’m glad about this. Each installment has to be savored. What I liked about these first two episodes is that Amy Sherman Palladino and husband Daniel have tried to rein it all in without getting overly broad. “Mrs. Maisel” borders on self-parody at times because it’s become such a paradigm. The acting remains top notch. It’s a zany show, with hints of “You Can’t Take It With You” at every turn. But the quality is still there, and I can’t wait to see where all these people take us.

One spoiler: we do know that the finale takes place at Carnegie Hall because the show filmed there last year and we all know it. But what happens and who’s involved? That remains a happy mystery.

PS Kudos to the rest of the cast. Caroline Aaron is a hoot and a half as the “real” Mrs. Maisel. Marin Hinkle is warmly nutty as Midge’s mom. And nice to see Chris Eigemann as Abe’s editor at the Voice.