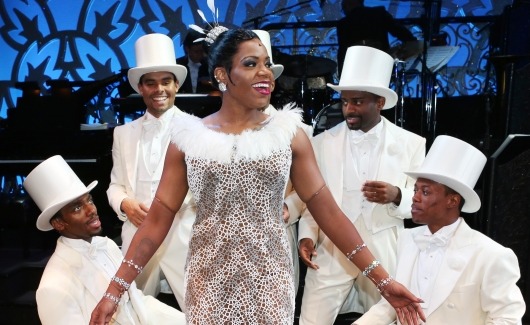 In Hollywood terms, Fantasia should be over 50 years old by now. But she is only still just 37!

One the great underrated singers of our time, a winner of “American Idol,” Fantasia Barrino has been chosen to play Celie, the central character of “The Color Purple” in the movie musical version of Alice Walker’s famous book.

Don’t get me wrong. I love Fantasia. But it’s a little strange that Cynthia Erivo, who won the Tony Award and has had an Oscar nomination, wasn’t selected to re-create her Broadway role.

“The Color Purple” musical had two lives on Broadway, which is unusual. The first time around it was kind of a mess, although it did play for two years beginning in 2005 with LaChanze in the main role. Then it was revived in 2015 in a totally revamped version with Erivo as Celie, Jennifer Hudson as Shug Avery, and Danielle Brooks as Sofia.

This was all after the 1986 movie starring Whoopi Goldberg, Danny Glover, and Margaret Avery as Shug.

Now Fantasia will be Celie, Colman Domingo will play “Mister” (the Glover role), Taraji P. Henson will be Shug. Danielle Brooks will reprise her role as Sofia from the Broadway revival.

Maybe Erivo didn’t want to do it again. Who knows? Fantasia can sainnng, as they say. When she sang “Summertime” on “American Idol” in 2006, Simon Cowell almost lost it. Fantasia has been hard to launch as a pop star, her voice is too good and too unconventional for the soulless kind of R&B pandered to on radio now. But she’s a star, and this will cement her career. And she’s only 37!

Producers will be the gang from the movie– Oprah, Steven Spielberg, and Quincy Jones, plus Walker and her daughter. Corey Hawkins and H.E.R. will also be featured. Blitz Bazawule, whose main credit is the Beyoncé video “Black Is King,” is set to direct the fresh take on the musical. Marcus Gardley is the wirter of the screenplay, adapted from Marsha Norman’s book. Warner Bros. will be the releasing studio.

The songs are by Brenda Russell, Allee Willis and Stephen Bray. Willis, sadly, has passed away in the interim. It will be up to Russell and Bray to write a new song so they can go for an Oscar nomination for Best Song.

Kudos to Fantasia! She must have had some great audition. But I’m not surprised.

and here’s a little gem you may not know, Sam Moore and Fantasia singing Diane Warren’s “Blame it on the Rain”