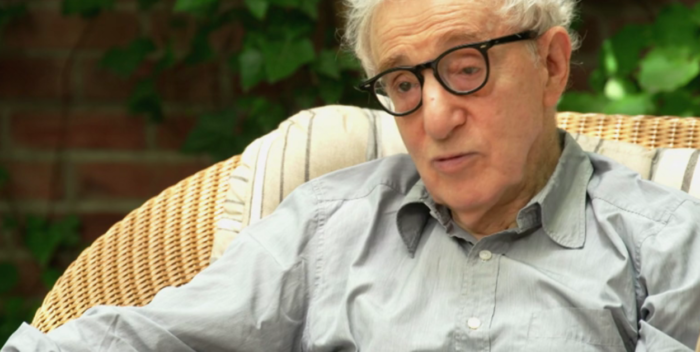 I’m reprinting this review from September 2020. Don’t hesitate to seek out “Rifkin’s Festival” and “Rainy Day In New York” which are now on Amazon Prime, other streaming services, and on DVD. Of course there are also 45 or more other Woody Allen movies to see including two dozen classics from “SLeeper” and “Bananas” to “Annie Hall” and “Manhattan,” “Zelig” and “Broadway Danny Rose,” “Broadway Danny Rose,” “Hannah and Her Sisters” and “Radio Days” to “Crimes and Misdemeanors,” “Match Point,” “Vicki Cristina Barcelona,” “Midnight in Paris,” and “Blue Jasmine.”

Woody Allen‘s “Rifkin’s Festival” opens the San Sebastian Film Festival in Spain on Friday night. Woody won’t be there because of the pandemic travel restrictions. The stunning Gina Gershon (her best work, brava) will be on hand but Wallace Shawn, Richard Kind, Douglas McGrath, Tammy Blanchard and Steve Guttenberg can’t make the trip. It’s too bad because they would have been lavished with applause and a standing ovation. I hope Gina really enjoys herself. She deserves it.

It seems impossible but Woody Allen will be 85 in December and he can still do it, he can still make a trenchant, absurd, fantastically funny comedy that is on its face improbable but altogether winning. Almost from the very beginning of this story about an unhappy couple who travel to the very same San Sebastian Film Festival you are laughing from down deep. And of course, all the big Woody themes are in place: why are we here? what’s the meaning of life? And what about death?

The age difference between 76 year old Wallace Shawn‘s Mort and 58 year old Gina Gershon‘s Sue shouldn’t rouse much ire among Woody’s critics. Neither should the involvement of Spanish beauty Elena Anaya, who is 45. There’s no “robbing the cradle” here. All the characters are adults and they know what they’re doing, or at least it seems like it until they become lost in Woody’s inevitable cat’s cradle of relationships gone awry.

Gershon is a movie publicist who’s married to a neurotic film teacher and failed novelist (Shawn). Her client at the film festival is a hot young French director played by Louis Garrell, who of course is handsome and shallow. Mort loathes him. Shawn stands in for Woody: a hypochondriac questioning life and death who seeks out a local doctor who happens to be beautiful and married to a mad man Picasso-like painter. As Sue becomes more involved with the director, Mort is set loose in San Sebastian to find and make trouble.

The film is punctuated by Mort’s black and white dreams, partially based on his teaching classic foreign films but a throwback to Woody’s parodying of Ingmar Bergman and Jean Luc Godard, among others, in his own early films. Is Woody repeating himself? Hardly. I think he’s starting to close the circle from the beginning to the end of his long, illustrious career. This won’t he his last film, god willing, but he’s at a point where he’s revisiting some old themes and poking fun at himself as much as the fabled directors who influenced him.

(I’ll stop here just to tell you that two time Oscar winner Christoph Waltz makes a long cameo toward the end which, for Woody Allen fans, as well as those of Max von Sydow and “The Seventh Seal,” is a spectacularly funny surprise.)

The setting of the festival is perfect for Woody, who can then move his eccentric and self involved characters through all the machinations one finds in such a place. The background stuff is not to be missed– the junkets, the publicists, the promotion of the films. For anyone who’s ever been to a film festival, these touches are the rainbow sprinkles on a delicious dessert. Listen for the quips, they fly by before you can finish your guffaw.

And then of course supporting characters emerge to further along the main quad’s inevitable collisions. I loved seeing Steve Guttenberg, of “Cocoon” and “Police Academy” fame, rise to this occasion. And Emmy winning Tony nominee Tammy Blanchard is a wonderful surprise herself — someone please add her to the imdb page for this movie.

As usual three time Oscar winner Vittorio Storraro gives a Woody Allen film its sumptuous look, and this might be my favorite so far. He certainly made me want to visit San Sebastian ASAP.

And this Mort: Wallace Shawn is a character actor. He’s a spice, never the main course. At 76, he’s made so many films and plays and TV shows better by his presence but I don’t recall him every carrying a whole movie. He’s the anti-lead, anti-sex symbol, a kind of proud gopher burrowing his way blissfully through this mess. He never once second guesses himself despite being called a grouch and a curmudgeon. He believes in himself almost to distraction. He’s his own comic relief. And that’s why his performance works.

Will Americans ever see “Rifkin’s Festival”? This film, like “Rainy Day in New York,” should have been at the New York Film Festival. We still haven’t officially seen “A Rainy Day in New York,” although today I’ve reported it finally has a distributor. Twenty years from now, film fans will think people of this generation lost their minds. Here are two terrific comedies that rank up there with the best of this important auteur’s work, and they’ve become weirdly banned in his home country. This is an egregious mistake and should not go on any longer.