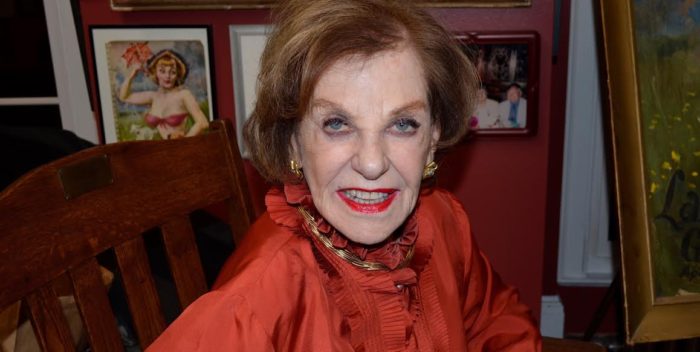 Joan Copeland was one of my favorite people I ran into over the years. The famed actress sister of legendary playwright Arthur Miller died today at her house out in Amagansett at age 99.

Joan was a pip. Flashback to the summer of 2013, Joan appeared in the lobby of the Bay Street Theater in Sag Harbor. This was a good 45 minutes away from her house. We were all there for the opening night of “Irma Vep.” “Joan,” I asked, “how did you get here?” She looked at me like I was crazy. She said, “I drove, of course. It’s only 45 minutes! The roads were very clear.”

On TV, Joan was a staple on Procter & Gamble soap operas like “Search for Tomorrow” (a five year run from 1967 to 72), “Love of Life,” “One Life to Live,” and “The Edge of Night.” She was also a regular on “Law & Order,” appearing in 8 different episodes. She also appeared in several movies, but she was a real New York actor — the kind that barely exists anymore — and split her time between the soaps and Broadway.

Condolences to her family, especially niece Rebecca Miller, who I know was very close to her. Joan was a talented, lovely lady, a connection to really classic New York theater, and she will be very much missed.