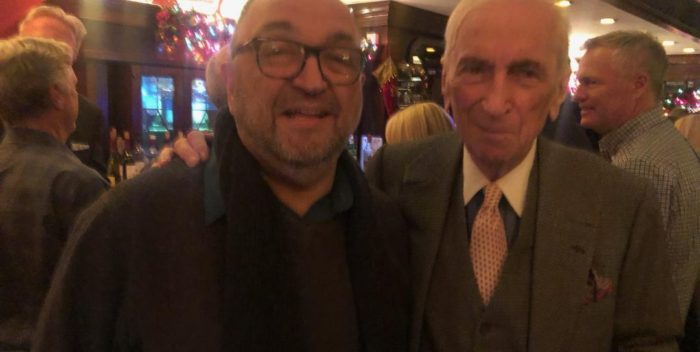 Saturday night in New York City, it was like old times, pre-pandemic style.

A bunch of famous people crowded into the Victoria Munroe art gallery at 67 East 80th St for the opening night show Adrian Nivola. Last name sound familiar? Adrian is the brother of actor Alessandro Nivola, currently starring in “The Many Saints of Newark.”

Adrian is the real deal, a very fine artist whose work is in high demand. The talent is in his blood: their grandfather, Constantino Nivola, has work in museums around the world and is constantly in retrospectives. Adrian’s work is on exhibit every summer at the Drawing Room in East Hampton.

This exhibit of small exquisite oil and pastels is almost sold out. Adding excitement to the work itself was a phalanx of well known faces including brother Alessandro, his wife Emily Mortimer, Joel Coen and Frances McDormand, Ethan Hawke, playwright Jonathan Marc Sherman, musician Hamilton Leithauser, and so on. Little red dots went up under the individual pieces very quickly. Later, over at restaurant Orsay, “Tammy Faye” and “Big Sick” director Michael Showalter told us about the film he’s shooting now downtown called “Spoiler Alert,” and we got to meet actress Jennie Dundas, who owns the very hot Blue Marble ice cream store on the Upper West Side.

Also at Orsay: famed actress Brenda Vaccaro happened to be dining with a friend, so we introduced her to this crowd and they were thrilled. Brenda’s featured in the new “Sex and the City” series debuting this weekend on HBO Max.

And yes: I can confirm that Alessandro Nivola will be starring in the Peggy Lee biopic with Michelle Williams. He tells that it doesn’t start until he films the “Boston Strangler” miniseries in Boston this winter. Just FYI.

THAT CROWD would have been enough, but a couple hours later we relocated to Neary’s Pub on East 57th St. and First Ave for the postponed-from-last year 10th anniversary tribute to famed and beloved restaurateur Elaine Kaufman. Elaine, who we miss terribly, passed away 11 years ago on December 3rd.

The New York Times’s indefatigable Peter Khoury put the reunion together and couldn’t have done a better job. Top of the guest list was legendary writer Gay Talese turned out in a three piece bespoke suit, 86 years young and tireless himself. God bless.

Dozens of Elaine’s regulars paid their respects and made toasts, and we were happy to see writer Carol Higgins Clark, and former NYC fire marshall Louie Garcia, and ex-Elaine’s head Chef Barry Wildman. Many of Elaine’s former waiters turned up, as well, and no one had a good word for the person who inherited Elaine’s when she died and destroyed it. (We don’t say her name, it’s like Beetlejuice.) Present and accounted for were two of New York’s most famous radio personalities, Carol Miller  and Jim Kerr of Q104.3 FM and Sirius Radio.

Was Elaine there? She was! She was and always will be in our hearts. And guess what? A musical is being workshopped soon about Elaine and her regulars called “Everyone Comes to Elaine’s.” I’ll let you know more about it soon.

The picture to the right– me and Gay Talese. He’s 86, I’m 64 and who looks younger? And thinner? Gay is a national treasure, (So is his famous and lovely wife, book editor Nan Talese.)