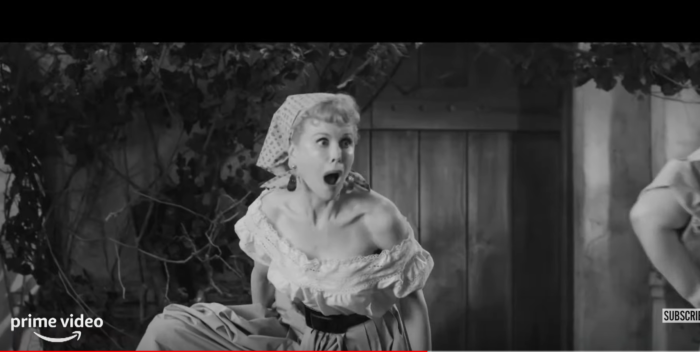 This isn’t a review. You’re not supposed to review anything until right before it opens. (That’s what they’re doing with “House of Gucci” because it’s a mess.)

Anyway, last night Aaron Sorkin unveiled his “Being the Ricardos” in New York with Nicole Kidman, Nina Arianda, and JK Simmons. Co-star Javier Bardem was not in town. “Being the Ricardos” is an Amazon Studios movie, their only real entry in this year’s Oscar race. They should have no trouble getting everyone their nominations.

“BTR” is all about Lucille Ball and Desi Arnaz, how they met, became TV titans. It’s no secret that this is not an episode of “I Love Lucy.” Instead, the clever screenplay addresses the making of one episode of the famed, immortal sitcom, in its second season, and everything around it. I’m not allowed to get into details yet. But suffice to say it’s a hit depending on what Amazon does with it.

The screening, which was sort of the New York premiere, was at a strange venue, Village Cinemas on Second Avenue. This is an old, drafty theater where the sound is boomy the further away you were seated. The oleaginous Cinema Society PR firm (not a society, just two people) decided it was best to put the critics in the very last row of the balcony, maybe as a challenge. The people sitting up front were kind of hasbeen models, people not in the motion picture Academy, and a miscellaneous hangers on. A number of people came and went past me in the balcony until 20 minutes into the film.

There was a Q&A after the film, which was hard to see because of the way the theater was pitched. (The last time I went there was to see “The Hateful Eight.”) But the cast is revved up. Nicole Kidman said the strangest thing was being in costume and character as Lucille Ball and talking to Lucie Arnaz, Lucy’s daughter, on set. Kidman so absorbs Lucille Ball, it will blow everyone’s minds.

The after party was at hotel that I’ve never heard of, called the Moxy, on East 11th St. There were no celebs. The stars of the movie came and went quickly. They figured it out fast. I had a nice chat with Nicole Kidman, who was masked and worried about being in a crowd. She’s had a banner year, what with “The Undoing” and “Nine Perfect Strangers” on TV. She will have an Oscar nod for “BTR.” Wait til we can talk about it more.