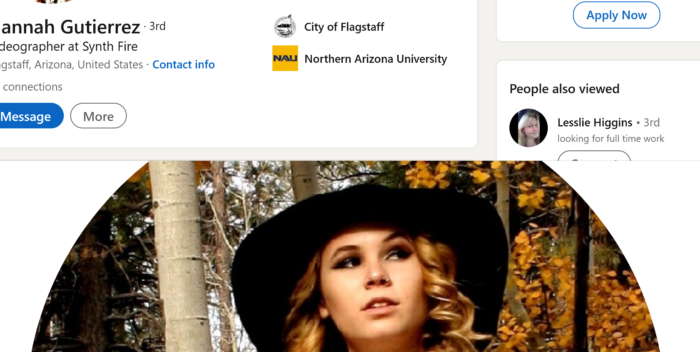 EXCLUSIVE Hannah Gutierrez has been identified as the armorer or weapons handler on the movie, “Rust.” According to reports, she laid out three guns on the Santa Fe set. One of them wound up killing Halyna Hutchins and wounding director Joel Souza, fired by an unwitting Alec Baldwin.

Gutierrez’s LinkedIn page includes a resume note from this past spring and summer working at Yellowstone Film Ranch in Montana from March through June. She described her job there: “Loading firearms with appropriately sized blanks. Ensuring gun safety on set along with instructing actors on how to use their guns.”

She is young and pretty, and according to LinkedIn a student at Northern Arizona University from 2017 to 2020 in “creative media and film.”

It’s unclear if Gutierrez was union approved or licensed, or still a student. But she comes from a family of “armorers.” Her father is the famous armorer and movie gun consultant Thell Reed, who she said trained her in an affidavit.