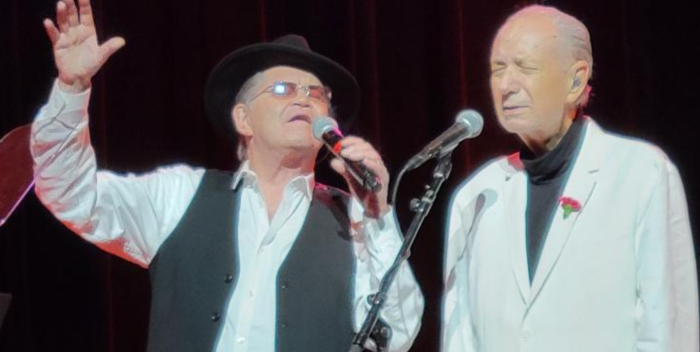 On Sunday night, Micky Dolenz and Mike Nesmith brought a crack band to Town Hall and celebrated the 55 years of hits as the Monkees. Davy Jones and Peter Tork are gone, but the beat goes on.

Yet the brand does not. Micky and Mike are on a farewell touring retiring the Monkees for good. Since they were hired in 1966 to play a faux Beatles for a Screen Gems produced TV show for NBC, the guys have had to pay a royalty fee to be themselves all these decades. Sucks, doesn’t it? Screen Gems– now known as Sony– should be paying them.

But there they were on stage, singing “Last Train to Clarksville” and “I’m a Believer” like time has stopped. Micky, a child star before the Monkees, and Mike, the songwriter of Linda Ronstadt’s “Different Drum,” are and were always showmen. So were Peter and Davy, and eventually they convinced the TV show’s producers, Bob Rafelson and Burt Schneider, to let them sing and play instruments on their records, and even tour. They were originals after all.

Mike was dressed in a non matching white suit, which may have suggested that his mother, years ago, invented Liquid Paper and made their family very rich. This was always a great story, like Beaver getting killed in Vietnam. But Nesmith hung with John Lennon back in the day, made music like the Byrds, and wrote lots of songs for the series. This year, Micky recorded an excellent album of those songs, produced by Mike’s son, Christian, which would get a Grammy nomination if, well, you know. Anyway.

Dolenz has never stopped working, whether as the Monkees or on his own, acting and singing. His voice remains perfectly intact and idiosyncratically his own. Meaning: you could pick it out of any crowd of singers. An underrated talent, Dolenz is still a believer and so are we. He knows the songs, written by the likes of Carole King and Gerry Goffin, Neil Diamond, Boyce and Hart, are solid classics and totally identified with him.

It didn’t hurt that the original recordings came played with the Monkees’ vocals by members of Phil Spector’s Wrecking Crew. The productions were impeccable and in the right hands, reproduced like works of art. So “Pleasant Valley Sunday” and “Daydream Believer” still resonate far beyond the top 40 of 1967. And “A Little Bit Me, A Little Bit You,” a Neil Diamond gourmet recipe, remains a killer.

Why were there so many young people in the audience? Kids, teens, people in their 30s, 40s? I mean, I grew up with the Monkees in real time. So who are all these people? Apparently there are generations still watching the TV show, which was modeled on “A Hard Day’s Night”  and “Help!” They see it in reruns on DVDs, maybe it’s streaming somewhere, it’s on YouTube. And they love it. Why not? Long after Micky and Mike leave the Sony owned brand behind, they will live on and on and on.

All hail the Monkees! See them on this final tour. They’ll make you smile.