UPDATE: Adele is on the cover of both Vogue US and Vogue UK. Of the two stories, the American one is far superior. Hats off to Abby Aguirre for at least getting some information about the new music (although it sounds a little like the old music). But both Vogues simultaneously? The push is on!

Adele is on the cover of November Vogue.

The mega splash is tied to the release of her “30” album on November 19th,and the single on October 15th.

The single is called “Easy on Me.” But no one’s going easy with this album. The push is on to make “30” a monster hit. (The idea is that Adele isn’t going to make it “easy for you” the person she’s singing to, likely her ex husband.)

The album has songs produced or written Danger Mouse disciple Inflo, plus the Swedish pop wizards Max Martin and Shellback; the Swedish composer Ludwig Göransson; and the Canadian singer-songwriter Tobias Jesso Jr., on a “very powerful song” she describes as “an Édith Piaf-y moment.” As with her previous albums, the vocal tracks are original demos because, she explains, demos have a charisma and an urgency that get lost if you rerecord them. “I never redo my vocals. Never. Never ever.”

Greg Kurstin, of “Hello” fame, wrote “Easy On You.” It seems like most of the songwriters on “30” are the same as on “25.” Why mess with a successful formula?

From the story: “The first song she plays is the first song on the album, a gut-wrenching plea of a piano ballad, the chorus of which goes: “Go easy on me baby / I was still a child / Didn’t get the chance to / Feel the world around me.” Her voice does different impossible Adele-ish things with the refrain “go easy,” and although it starts to take on a euphoric tone…”

Another song: “A certain combination of elements—sexy ’70s groove, heavy strings, heavier lyrics—immediately calls to mind Marvin Gaye. (What’s Going On was a “very big reference” on the album, turns out.) “My little love,” Adele sings in a low, smoky register. “I see your eyes / Widen like an ocean / When you look at me / So full of my emotions.”

More:
I’m not sure I will survive another of Adele’s new songs, but as she plays four more, it becomes clear that they are mapping a progression. The next one is cathartic, a soulful promise of new love that has her repeating variations of: “I just want to love you for free / Everybody wants something from me / You just want me.” The fourth song is downright upbeat, meant to be a laugh-while-you’re-crying respite from the heaviness—“Otherwise we’d all kill ourselves, wouldn’t we?” Then comes a joyous anthem. Over gospelly organ she sings: “Let time be patient / Let pain be gracious.” Toward the end a chorus of her friends chimes in, chant-singing, “Just hold on, just hold on,” over and over. “The thing that they’re all singing is what my friends used to say to me,” Adele explains. “That’s why I wanted them to sing it, rather than an actual choir.”

“The last song she plays is the final song on the album. It was written and recorded while a TV in the studio played Breakfast at Tiffany’s on mute, she explains. “As it finished, we were trying to work out how to end the song, and I said, We should write it as if we were writing the soundtrack—you know, at the end of the movie, where it pans out.” The arrangement is whimsical and wall-of-sound retro, full of strings and vibrato and midcentury romance, but the lyrics deliver a subversive twist. The first line: “All your expectations of my love are impossible.” 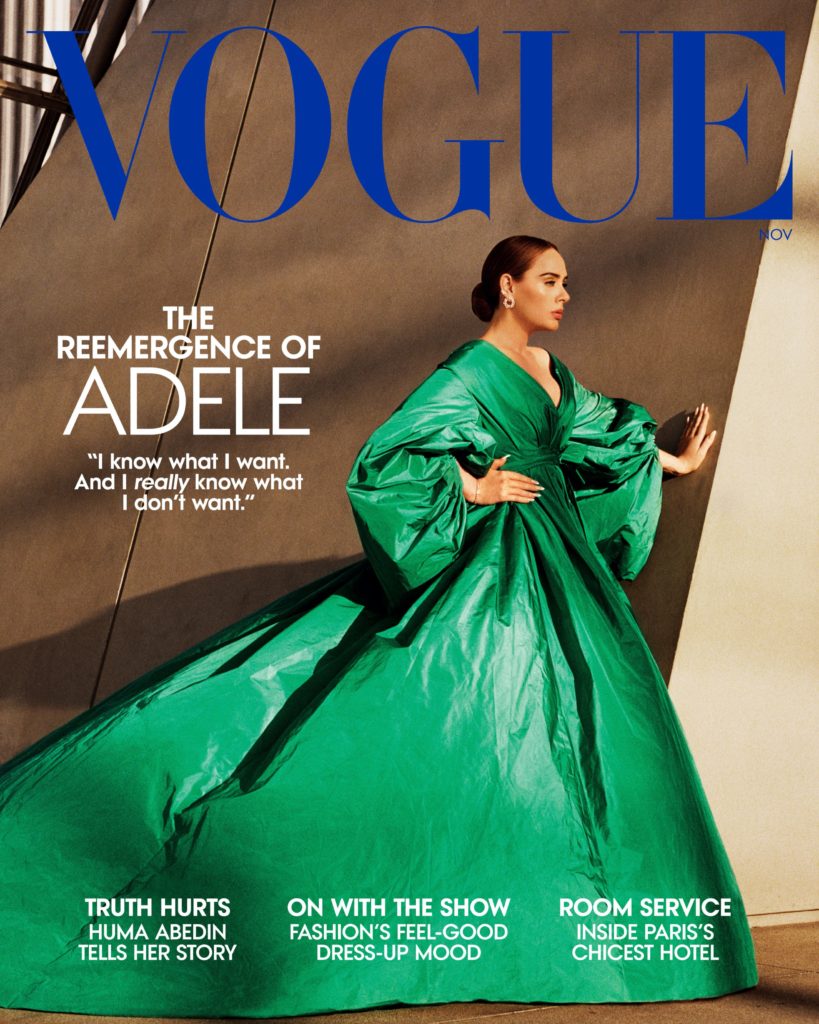