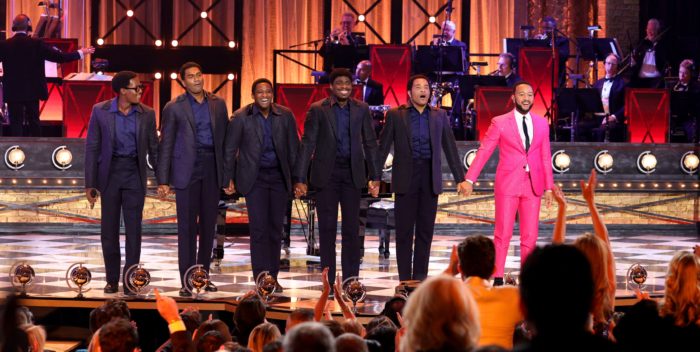 If you watched the Tony Awards special a couple of weeks ago, you may have noticed John Legend did a whole segment with the cast of “Ain’t Too Proud,” the Broadway musical.

It wasn’t just a nice booking. Turns out John has added his company’s name, Get Lifted, to the list of producers for the Temptations musical, along with his partners Mike Jackson and Ty Stiklorious. John and Mike Jackson already won a Tony for being producers on August Wilson’s “Jitney” reunion in 2017 for Best Revival of a Play.

This is a smart idea. Legend may have some designs on playing one of the roles when “Ain’t Too Proud” becomes a movie. He’s not as lanky as Eddie Kendricks or David Ruffin, but he’s certainly got the chops. He could easily play Smokey Robinson, who wrote many of the group’s hits.

“Ain’t too Proud” re-opens on October 16th. It’s one of my favorite all time shows, I could listen to that album over and over.

Watch the clip here from “Broadway’s Back!”– John knocked it out of the park with the cast.