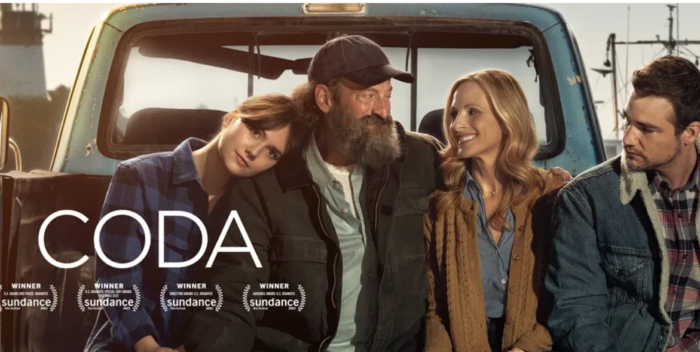 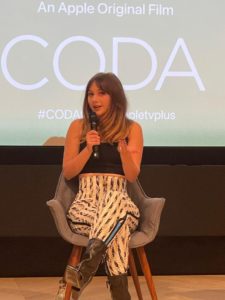 The brilliant “CODA,” currently on Apple+ TV, had a COVID safe screening and Q and A at the Edition Hotel on Sunset Boulevard Friday night, moderated by Rotten Tomatoes editor Jacqueline Coley.

“CODA” debuted last winter at the Sundance Film Festival. The title is a double play on the word that means the end of a musical passage, and the organization Children of Deaf Adults. Many in Hollywood think it’s the best movie released so far this year, but still under the radar. The film stars the stunning Emilia Jones as Ruby, a teenager discovering her knockout singing voice in a family of deaf people. Oscar winner Marlee Matlin plays her mother.

At Sundance, Apple paid a record breaking $25 million for the film. The movie has a 96 on Rotten Tomatoes.

Sian Heder, the writer and director of the film told the audience: “To be Deaf is more than sign language, it’s an experience that only Deaf people know.  This film is about that and the family that with all their issues deeply love each other.”

Talking about the challenges of doing this breakthrough film, she observed, “There is no playbook for this, no handbook.  For me, it was important to understand Deaf culture in a deep way.  I learned ASL (sign language) with a Deaf teacher and wanted to make sure I was honoring the culture.  Forty percent of this film is written in ASL, American Sign Language.” 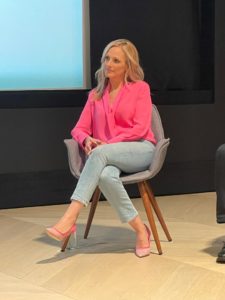 Marlee Matlin, who won her best actress Oscar for “Children Of A Lesser God” thirty five years ago added, “ “I’ve seen so many different aspects of people that I’ve worked with.  Throughout the years, I go to work, I get into characters as I always do.  But on this set on the first day,  it was a different energy, a different vibe.  I felt like I was home, everyone signed.”

Troy Kotsur, who plays the Dad with such heart, explained: “ I was so rooted in this character, when I finished I missed the Rossi family.  I couldn’t let go, it too, me a couple of months to even shave off the beard.  My wife was not happy.” The simply wonderful Eugenio Derbez who plays the music teacher, Bernardo, noted that, “My character was maybe a failed rock star in Latin America, but his passion for music never wanes and then he realizes he loves teaching. He wants Ruby to be what he couldn’t be.”

Emilia Jones, who plays Ruby, explained how much she immersed herself in the role (and American actors wonder why so many roles are going to the Brits)  thanked Heder. She said, “Thanks for taking a risk with this young British girl who never had a singing lesson, and who never knew anything about the deaf culture.”

This British gal will probably wind up with a best actress nomination, as the film and all the actors in it deserve all the awards kudos they will surely get. Heder ended the night with a quip, although she did mean it when she said that, “ASL is the best set language, because you can talk while you are rolling”!

“CODA” is still available on Apple TV, and maybe with awards season it will get a small theatrical run. It deserves it.