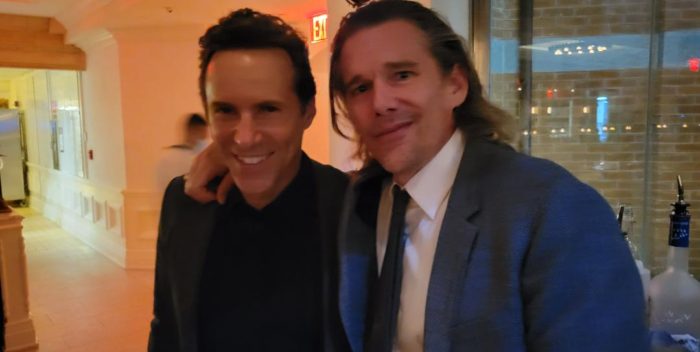 The New York Film Festival, which starts tomorrow night, was upstaged last night by the Tribeca Film Festival roaring back with a surprise September screening and party for “The Many Saints of Newark.” It’s hard to imagine the NYFF can top the glamorous “Saints” premiere, especially since it was held at their opening night venue, Tavern on the Green.

Not only did “Sopranos” and “Saints” stars turn out in full force, but plenty of A listers came to celebrate the movie and its cast. Among the guests was Ethan Hawke, bffs with Alessandro Nivola, Nivola’s actress-director wife Emily Mortimer, plus Zoe Kravitz, Bobby Cannavale and Rose Byrne, the great Steve Buscemi, and even, for some reason, the “cancelled” James Franco whose date sported a wild orangey wig.

There was also a heavy presence from the “Sopranos” crowd: Little Steven van Zandt and his wife Maureen (Silvio and Gabrielle Dante, to you), Edie Falco (Carmella Soprano), Aida Turturro (Janice Soprano– looking stunning), and Joey Pants Pantoliano (Ralph Cifaretta). I had a lovely reunion with Marcy Gandolfini, first wife of James and mother of Michael, who plays his father’s character as a teenager in the movie.

Corey Stoll, who we first met when he played Hemingway in Woody Allen’s “Midnight in Paris,” took a victory lap as a much more cunning Uncle Junior than we remembered. Stoll is currently killing it as Mike Prince, rival to Bobby Axelrod on “Billions.” He told me that David Chase and Alan Taylor asked him to sing like Dominic Chianese did when he played Junior in the series.

Stoll laughed and shook his head no. “They wanted me to sing. I wasn’t going to try and duplicate Dominic Chianese singing,” he said. “I just whistled instead.”

Everyone sang the praises of “Saints” star Alessandro Nivola, whose star turn as Dickie Moltisanti should earn him awards status this winter. Ethan Hawke and wife Ryan, who’s turned into quite a producer with “The Good Lord Bird” on Showtime, are Nivola’s biggest fans.

Ethan said: “I spoke to Sandro after his audition and asked him how it went. He said it the best audition he ever had. I said, That means you won’t get the part! But he had to get it. Everything he’s done has led up to this.”

Vera Farmiga, who was glowing in red dress, has the role of her life as Livia Soprano, created by the late Nancy Marchand. In the series, Livia was bitter and cruel, but in the movie Farmiga gets to play her just as Livia is transitioning from a young housewife into Tony’s evil mother. If there’s a reason to make a sequel– and there will be one– it’s to see Farmiga’s trajectory. A past Oscar nominee for “Up in the Air,” Vera joked that with the pandemic was thinking of quitting the business before “Saints.” Now she has an amazing journey ahead of her.

And then there was David Chase. He actually seemed a little grumpy sitting out there on Tavern on the Green patio chair. Maybe too many accolades? Was he overwhelmed by all the praise? “Yeah, maybe a little,” he conceded. Is he ready to make more movies? “I guess so,” he said. “If Warner Bros. wants to do it, and Terry Winter will write them, yeah.”

PS Zoe Kravitz is as tiny as a teardrop. She’s also quite lovely. She told me about the movie she’s directing with Channing Tatum and Naomi Ackie called “Pussy Island.” Does it have pussy willows? “Uh, no.” A lot of cats? “A lot of cats, yes!” she said. “Is it a comedy?” She replied: “For some.” A horror movie? “For some, yes,” she laughed. “You’ll be pleasantly surprised. I’ll see you at the premiere.”