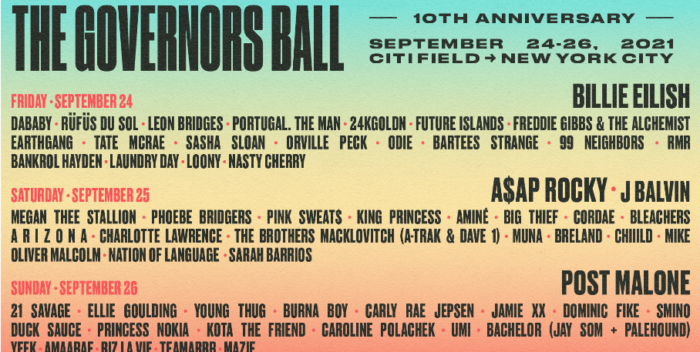 The Governor’s Ball — a huge outdoor weekend rock festival — has been flogging tickets for weeks. They have huge amounts unsold. They even produced a commercial with Billie Eilish begging fans to come see her. Eilish’s Friday night line up on September 24th and Post Malone’s on the 26th, are hurting in the sales department.

So today new Governor Kathy Hochul — whose title of Governor has nothing to do with the festival — announced the state will give away tickets to teens who get vaccinated.

The tickets will be available to teens who get their first shot at Mosholu Montefiore Community Center in the Bronx, or at Variety Boys & Girls Club of Queens in Astoria, Hochul announced.

Right now it’s the first 125, but wait and see if this works, more free tickets will be available.

The Governor’s Ball takes place in CitiField, home of the Mets, next weekend. DaBaby was originally scheduled to play, but he was dropped like a hot potato after his anti-gay comments.

For weeks, the producers have insisted that their three day passes were sold out but they had tickets to the Friday and Sunday shows. They’ve never sold out. It’s not because the acts are bad or unpopular. It’s because people are scared, rightly so, of going to a festival with 40,000 people and coming home with COVID. A t shirt is always a better souvenir.