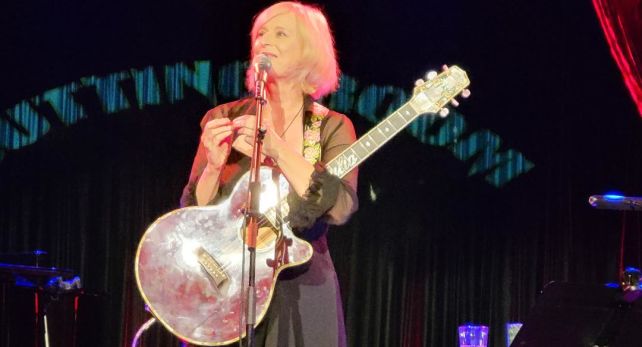 What a pleasure to be back at the Cutting Room last night to hear live music. And that pleasure was doubled by the sound of Julia Fordham’s’ voice, a whole separate musical instrument of magnificence.

Fordham’s first hit, “Happy Ever After,” written as apartheid fell apart, came in 1988 and still holds up sounding as fresh and relevant as ever. She’s just signed a new deal with BMG Music Publishing and released a new album ironically called “Cutting Room Floor.”

A UK singer who lives in Los Angeles, Fordham has been on a short tour of the east coast selling out venues. I was even startled when I saw the line down East 32nd St. yesterday of fans waiting to get into the Cutting Room. (Proof of vax was required, many wore masks.)

Yes, it’s the voice. It doesn’t hurt that Fordham is attractive and funny, has a great stage patter and an ease with the audience. Her fans are legion, and bring gifts because her songs like “Manhattan Skyline” and “Concrete Love,” “Porcelain” and “Lock and Key” have touched them personally over the last three decades.

Fordham performed all her hits as well as three new songs with composer Steven Argila, who accompanied on her piano as she played guitar and percussion. (This is the way it is now as her British musicians couldn’t get into the US because of pandemic restrictions.)

Back to the voice. It is its own instrument, one of a kind, an octave jumper that has more colors in it than any other singer of her generation. She’s at much as home with Joni Mitchell’s “A Case of You” as she is with her own international hit of “Love Moves in Mysterious Ways.” (Fordham joked about recently watching the music video of that song which intercuts her with Demi Moore, star of “The Butcher’s Wife.”)

The Voice remains supple as ever, an absolute delight coming out of a dedicated musician who’s gone her own way, making albums with Peter Asher and Larry Klein, with comedian Paul Reiser, attracting the attentions of people like David Lynch and India Arie, the latter stopping the release of “Concrete Love” years ago so she could sing on it with Fordham.

Next stop: the great Club Passim in Cambridge, Mass tomorrow night.  I’m sure there will be a line down their block, too!