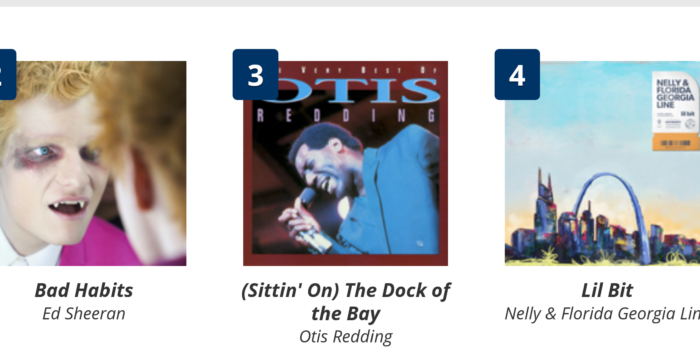 In the top five right now and for the last couple of days on iTunes: “Ain’t No Mountain High Enough” by Marvin Gaye and Tammi Terrell, and “Sittin on the Dock of the Bay,” by Otis Redding. Each of them is a key anthem of the classic soul era.

They are wedged in between hits by Olivia Rodrigo and Ed Sheeran.

Those Golden Oldies aren’t the only ones holding spots on the iTunes charts. Singles by the Jackson 5, Aretha Franklin, the Righteous Brothers, Gloria Gaynor, the Commodores, and the Gap Band are all in the mix in the top 100. So is James Brown’s “I Got You.”

Even more strangely comes “Somebody’s Watching Me,” by Rockwell (really Michael Jackson singing lead), Puff Daddy and Faith Evans’ Police remake with “I’ll Be Missing You,” and two different cover versions of “Smells Like Teen Spirit.” Mariah Carey’s 20 year old hit, “We Belong Together” is with them.

If that wasn’t weird enough, Dave Grohl and the Foo Fighters have made an album of Bee Gees covers that’s in the top 5 albums. Two of the songs are on the iTunes top 100.

Add to that the presence in two spots of Biz Markie’s hip hop classic, “Just a Friend.” He passed away this week at age 57.

So we are definitely in a nostalgic mood this summer. Funny that it’s 50 years since a summer of great originality and innovation. We are on the downside of originality, that’s for sure.

Ain’t No Mountain High Enough was written by Nik Ashford and Valerie Simpson. Otis Redding wrote “Dock of the Bay.”