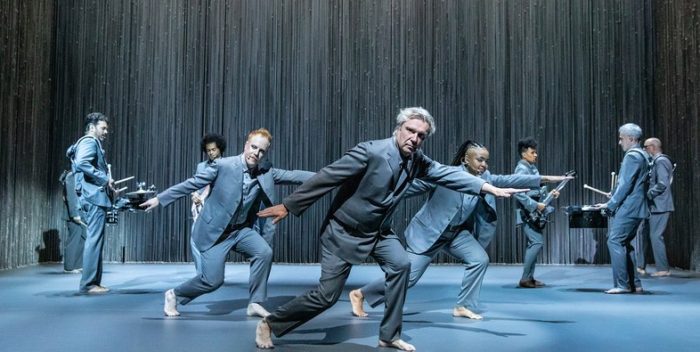 I think I first saw David Byrne and the Talking Heads in 1977 in Boston, probably at the Rathskeller. I awoke one morning to Charles Laquidara playing a song about people living in buildings “with every convenience.” It was the strangest song I ever heard, and remains a favorite 40 plus years later.

So guess what? David is receiving a Special Tony Award for his hit Broadway show, the unique “American Utopia.” He’ll receive it on September 26th at the belated 2020 Tony Awards. Bravo!

This gives David three of the four letters in “EGOT.” He has a Grammy, of course, and an Oscar for collaborating on the 1988 score of “The Last Emperor. Now he has a Tony Award. He may be Emmy nominated for “American Utopia” which was directed by Spike Lee for HBO this past year. He should win. Then he will be an EGOT.

“American Utopia” returns to Broadway this fall as soon as “Springsteen on Broadway” wraps up its summer run. The house of “Hello, Dolly!” and “The Producers” is rockin’ this year! (“American Idiot” also played there.) I could see “AU” over and over. Congrats to David!

PS Special Tony Awards are also going to Lin Manuel Miranda’s “Freestyle Love Supreme,: created by Thomas Kail and Anthony Veneziale iwith Miranda, and  was developed in the basement of The Drama Bookshop in 2004, which they now all own. The show ran at Broadway’s Booth Theatre in 2019. Directed by Kail, the acclaimed show features a comedic improvisational musical structure, and a rotating cast; Freestyle Love Supreme will return to Broadway for a strictly limited engagement at the Booth on Thursday, October 7 through Sunday, January 2, 2022.

Now the Tony’s will have some cool stuff to put on CBS September 26th. Good work!