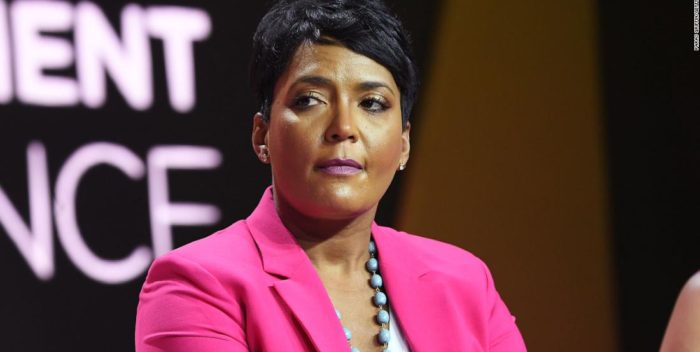 Here’s a shock: Keisha Lance Bottoms, the popular and successful mayor of Atlanta, is throwing in the towel. One term was enough for her. She’s out, and won’t run for a second term. She doesn’t really say why, except that she’s done, and hopes the Democratic party there will find a new candidate. I know nothing about Atlanta politics, but this must throw the city into a state of political turmoil. It doesn’t seem like Bottoms has a health issue, so who knows what’s going on? She was an up-and-comer. This is a disappointment, certainly.

She writes, and says in posted video:

“As Derek and I have given thoughtful prayer and consideration to the season now before us, it is with deep emotions that I hold my head high, and choose not to seek another term as mayor,” said Bottoms, who has scheduled a 10 a.m. press conference Friday at City Hall.

“People are entitled to their opinions, but don’t ever question whether or not I care,” she said at a press conference this week focused on crime. “My love for this city is deeper than probably many others standing here because my family goes back 100 years in the city. So whether I am mayor of this city or not, I will do everything that I can possibly do to keep our communities safe.”