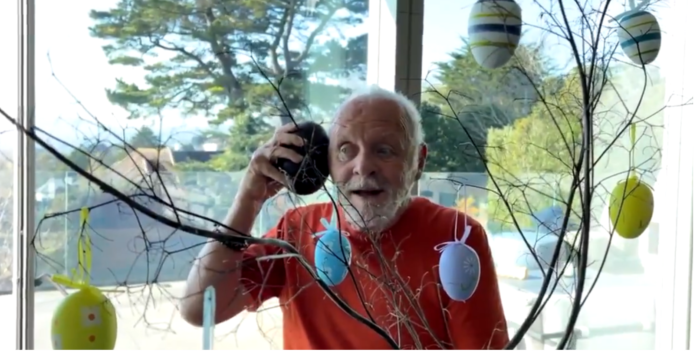 Sir Anthony Hopkins, who is Welsh, is having the time of his life on a trip home to Wales. He’s been posting pictures from his homeland on social media all week.

It’s lovely, of course, and he’s certainly enjoying himself. Only one problem: Sir Tony lives in Los Angeles, where the Oscars will be presented next Sunday. In order to attend the Academy Awards, he’d have had to returned to the US and begun a quarantine several days ago. The time difference, also, would have added to his travel problems.

So it would seem that Hopkins, who didn’t show up for the Golden Globes or SAG Awards, isn’t coming to the Oscars next Sunday. He’s nominated for Best Actor for “The Father,” his sixth Oscar nomination for Best Actor. (He won in 1991 for “Silence of the Lambs.”) His performance in my opinion is the best of the year, or of several years. But he’s not on the inside track to win, and he knows it.

Is Hopkins sending a message that he’s taken himself out of the race? I think so. First of all, already owning an Oscar, he knows that this is the only shot for the late  Chadwick Boseman, nominated for “Ma Rainey’s Black Bottom.” Rather than campaign at all, Hopkins has backed off entirely, giving Boseman a wide berth. He knows that the Academy’s sentiment is with Boseman, and you can’t run against someone who isn’t there.

Don’t get me wrong. The coming win for Boseman will be much applauded. He made many movies and gave terrific performances while secretly battling a terrible illness. He died way too young. Everyone wants to seem him written permanently into movie history and rewarded for his talent and bravery. What Hopkins is doing is the gentlemanly thing, and he should be applauded, too. Plus, he got a nice trip  home.

So Hopkins doesn’t appear to be readying himself for a trip to LA’s Union Station next Sunday, or even to a satellite station. That’s too bad. We will miss him. Maybe when the show and hype are over, he’ll do some interviews for “The Father.” It’s the performance of an already amazing lifetime.

Visiting the playground of Cowbridge Grammar School…. enjoying the fresh scent of spring in the air. @AHCollection_ @nokidhungry https://t.co/GptsrxnKWI pic.twitter.com/v5rRv1KlJh